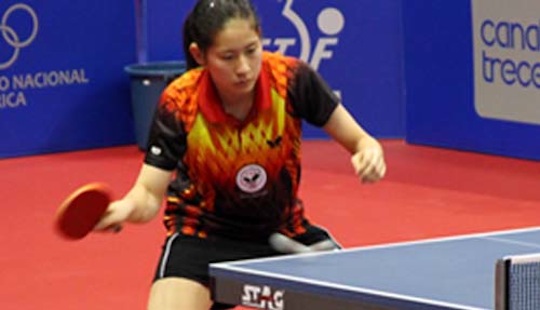 Absent from the international scene for much of the past year owing to injury, 30 year old Thiago MONTEIRO showed a return to full fitness. He beat Argentina’s Gaston ALTO in the semi-finals and LIU Song, also from Argentina, in the final.

Both were formidable adversaries. LIU Song, now officially a veteran, having just celebrated his 40th birthday, is a previous Latin American champion; whilst 26 year old Gaston ALTO was the sensation of the tournament. On the first day of play he beat the Dominican Republic’s LIN Ju, the top seed and a player who has already booked his place in the 2012 London Olympic Games. Furthermore LIN Ju was the winner of the Men’s Singles title at the Latin American Championships in Rio de Janeiro earlier this year in March.

Both are players who have reaped benefits from competing in events organised by the International Table Tennis Federation’s Global Junior Programme; both competed in the 2010 Youth Olympic Games in Singapore, and both have won titles of the ITTF Junior Circuit in 2012.

Thiago MONTEIRO now qualifies to compete in the LIEBHERR Men’s World Cup to be held in Liverpool, England from Friday 28th to Sunday 30th September 2012; whilst one week earlier, from Friday 21st to Sunday 23rd September, Caroline KUMAHARA will play in the VOLKSWAGEN Women’s World Cup in Huangshi, China.