Home  »  OTHER SPORTS   »   Boxing: Nevin to star for British Lionhearts 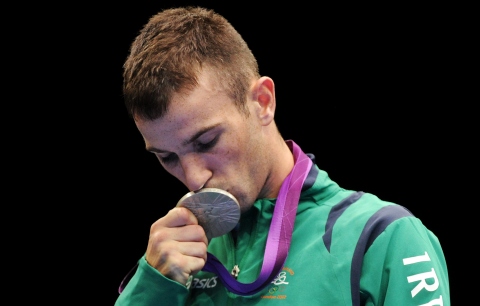 Lausanne, Nov 13: World Series of Boxing (WSB) is delighted to confirm that Irishman John Joseph Nevin will compete this third season with the British Lionhearts. The explosive 23-year-old Lightweight (57-61kg) will be taking to the ring to face Branimir Stankovic from Croatia in his first outing for his new team on Friday 23 November at Celtic Manor in Cardiff (Wales).

It promises to be an electric battle between two sumptuous boxers who went head-to-head last season in an absolute epic.

The record-breaking orthodox boxer made history by becoming the first Irishman to collect medals at two AIBA World Boxing Championships before ensuring national hero status in his homeland with a sensational silver medal at the London 2012 Olympic Games.

Over the last two seasons, he was an integral part of the French Franchise Paris United, helping them claim the WSB Team Trophy in Season I. With his heroics at the Olympic Games, expect the stylish 23-year old orthodox fighter to really come to the fore in the competition with the British Lionhearts.

“I am excited to confirm my place in the British Lionhearts team and I am looking forward to my first fight which will take place at the end of November”, declared John Joe Nevin. “After my silver medal at the London 2012 Olympic Games, I was offered different opportunities and I wanted to take some time to consider them all. It appeared that my wish to carry on with WSB, a competition that has given me so much in the past two years, was the direction I wanted to go. I am now fully focused on working hard towards the Rio 2016 Olympic Games.”

Matt Archibald, General Manager of the British Lionhearts said: “We are delighted to have John Joe join the British Lionhearts squad. He is a top quality performer and his win against Alvarez Estrada from Cuba in the Olympic semi-finals was one of the stand-out performances of the Games. We also hope that, in signing John Joe and his team-mate Joe Ward, we will engage with the Irish boxing community who came in such numbers and supported so vociferously during the Olympic boxing competition.”

Joe Ward will start his WSB career on the very same day facing Imre Szello (6-2), 14 December, at exact time TBC – British Lionhearts vs. German Eagles, Earls Court in London, Opponent to be announced around 2-3 weeks before the fight

View all posts by: Abdul Rahim
3 Responses to “Boxing: Nevin to star for British Lionhearts”