Home  »  OTHER SPORTS   »   Cuba, England and Russia double up in Yerevan 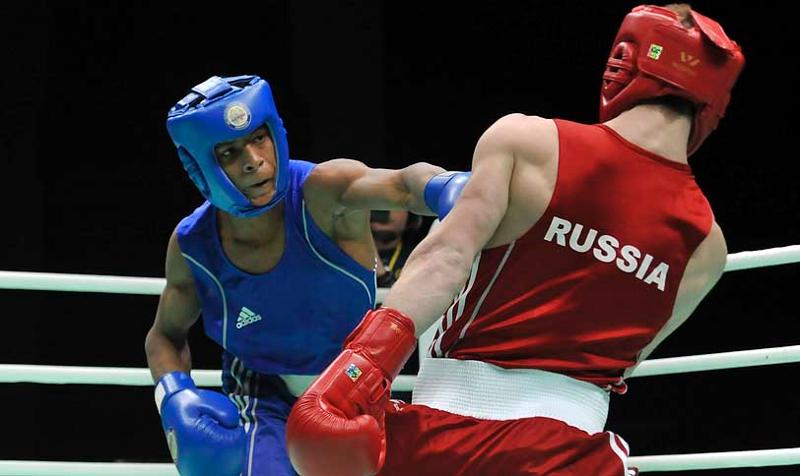 Yerevan – Armenia, Dec 08: The last international event of year, the 2012 AIBA Youth World Boxing Championships, came to an end in the Armenian capital today with ten new Youth World Champions being crowned in front of a packed crowd. Cuba, England and Russia lit up the final day of competition with their boxers claiming two gold medals for their countries.

Uzbekistan’s Pavlyukov Youth Memorial Tournament winner Murodjon Akhmadaliev had travelled to Yerevan as one of the outstanding favourites for the Light Flyweight (46-49kg) title but there was not happy ending for him. China’s Bin LV thwarted his efforts and came out on top in the day’s first final, mixing it up well to cause the Uzbek trouble throughout the three rounds. Showing more energy, the Chinese boxer was the one who triumphed, winning 11:8 to take the gold.

Most expected Puerto Rican sensation Jeyvier Cintron Ocasio to sweep all before him and get his hands on the much coveted Flyweight (52kg) title. The 17-year-old London 2012 Olympic Games quarter-finalist however had not anticipated just how good England’s Oliver Simpson would be in the final stages of their encounter. Cintron Ocasio looked on course to take the victory after winning each of the first two rounds by a point but Simpson had other ideas and mounted a stunning comeback to level the scores in the final frame to be awarded the win on countback 10:10.

Cuba’s youngest team member Alexei Guibert Villalon was inspired on finals day in Yerevan as he battled to victory against Russia’s AIBA Junior World Championships bronze medallist Magomed-Rashid Dzhabrailov. The two had met earlier in the year at the Pavlyukov Youth Memorial Tournament in Russia with the home boxer coming out on top in that one but in the bout that really mattered, it was Guibert Villalon who was triumphant 12:8 to take home the Bantamweight (56kg) gold medal.

European Junior Champion Khusein Baysangurov had to dig deep against rising Mexican power Raul Curiel Garcia. The Russian won each round with some quality counter-punching to celebrate his country’s first gold medal in Yerevan with his 15:10 victory at Lightweight (60kg). It was good to see the mutual respect between the boxers after the final bell.

The American Boxing Confederation had two of its boxers battling it out in the final Light Welterweight (64kg) showdown as Cuba’s two-time Youth National Champion Kevin Hayler Brown faced Guatemala’s two-time Central American Champion Lester Normandy Martinez. The Cuban boxer was simply irresistible from the second round onwards as he pegged back his two point deficit in style to win 17:14 and give his nation its second gold medal at these championships.The Cuban receiving the best boxer trophy as a result of a series of sumptuous performances.

Armenia’s Klitchko Brothers Youth Tournament bronze medallist Nikol Arutyunov was the toast of the crowd after standing tall against Scotland’s Golden Gloves of Vojvodina Youth Tournament silver medallist Scott Forrest. The Scot had really impressed during the week in Yerevan however with thousands of supporters there to cheer on Arutyunov, the Armenian won the battle 13:9 and was crowned AIBA Youth World Heavyweight (81kg) Champion.

17-year-old European Junior Champion Andrey Stotskiy from Russian locked horns with Poland’s surprise package Pawel Wierzbicki in the penultimate bout of the day. Stotskiy dominated the final and did not give much away against the Polish boxer. The Russian showing just how accomplished he is with a sensational 21:9 win to claim the Heavyweight (91kg) title.

Most of these fledgling talents will now be looking to break into their elite squads for the 2013 AIBA World Boxing Championships in Astana with their eyes then firmly set on qualifying for the Rio 2016 Olympic Games. Remember Robeisy Ramirez Carrazana went from AIBA Youth World Champion to Olympic Champion within two years. The future does look bright. —- AIBA