India, Aug 10, 2018: The Rugby World Cup trophy – the Webb Ellis Cup – arrived in the city of bhubaneswar odisha today much to the excitement of over 15 thousand aspiring young rugby players on the final leg of the Rugby World Cup 2019 Trophy Tour in India.

The Webb Ellis Cup, making it’s first ever visit to India, was welcomed by the Chief Minister Naveen Patnaik and members of the Sports and Youth Services Department from the Government of Odisha. 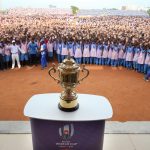 The Rugby World Cup takes place every four years and in 2019 will be hosted in Japan – the first tournament to be played in Asia.

The Trophy Tour supports World Rugby’s Impact Beyond Programme which utilises World Rugby tournaments as a catalyst for the global growth of the game.

Project Asia 1 Million, which aims to attract one million new rugby participants by 2020, has already reached over 500,000 people across Asia.

“It is good to witness the excitement around the Rugby World Cup 2019 Trophy Tour in India.

Odisha is the nursery of rugby in India and our players have brought laurels for both the state and the country.

We are also the proud host of the Asian U18 Women’s Rugby Sevens in October. I wish to encourage more kids to come forward and play the sport of rugby.”

Following the strong show of support and interest in the game from the Government officials of Odisha, the Webb Ellis Cup travelled to the Kalinga Institute of Social Sciences (K.I.S.S.) where it was given a rapturous reception by more than 15 thousand students amid scenes of great enthusiasm as all eyes were eager to catch a glimpse of rugby’s greatest prize on it’s first visit to India.

The students aged 11-14 welcomed the Webb Ellis Cup on the pitches of K.I.S.S before joining in a Get Into Rugby training session delivered by Rugby India coaches and players including Munna Murmur and Rajkishore Murmu and Women’s players Sumitra Nayak, Hupi Majhi and Liza Sardar.

World Rugby CEO Brett Gosper, who accompanied the Trophy Tour in both Delhi and Mumbai, commented:

“The remarkable level of excitement for the arrival of the Rugby World Cup trophy in Bhubaneswar is another marker of the huge potential that exists for the game across India.

The extraordinary scenes of over 15,000 boys and girls enthusiastically welcoming the Webb Ellis Cup represents a record for Trophy Tour events around the world and is a demonstration that the future of rugby in India is looking very bright.”

“We thank Chief Minister, Naveen Patnaik, for his kind invitation to host the Webb Ellis Cup in Bhubaneswar and extend our gratitude to Vishal Dev and the Sports and Youth Services Department of the Government of Odisha as they continue to show their strong support for the game of rugby in this region.”

The last two years has seen the biggest growth and development of rugby across the country with India ranked first in Asia and third in the world in terms of participation numbers through World Rugby’s Get Into Rugby programme by reaching over 160,000 participants, with 40% female in 2017.

Young people have been at the heart of the Rugby World Cup 2019 Trophy Tour in India reflecting the huge potential for the growth of the game in future generations (bhubaneswar odisha).

Following a formal welcome by the honourable Sports Minister of India, Col. Rajyavardhan Singh Rathore in Delhi on Monday, players and fans from local clubs across Delhi had the chance to view the Webb Ellis Cup at a Rugby India Get Into Rugby event in the city.

The iconic trophy has also visited some of India’s most recognisable and beautiful locations including one of the seven wonders of the world the Taj Mahal, one of the best-preserved architectural sites in Delhi, the Red Fort, as well as the famous memorial India Gate.

India is the eighth leg of the Rugby World Cup 2019 Trophy Tour and follows a recent visit to the Philippines.

Since the Tour launched in 2017, the Rugby World Cup has visited both established and emerging rugby nations including:

The Rugby World Cup is in India for the first time and will also visit countries including Nepal, Malaysia, Pakistan, Brazil and Chile in the lead up to the tournament.

Rugby has a rich history in India, dating back to 1924 when the inaugural All India and South East Asia Rugby Championship was first played on Indian soil.

The last two years has seen the biggest growth and development of rugby across the country with India ranked first in Asia and third in the world in terms of participation numbers through World Rugby’s Get Into Rugby programme by reaching over 160,000 participants in 2017.

In addition, rugby is now a core sport in the SGFI’s National School Games Calendar for the U14, U17 & U19 Boys and Girls categories as well as part of AIU’s National University Games calendar – yet another major milestone for Rugby India and World Rugby’s ambitions to grow the game globally.

Rugby India President, Numazar Mehta, said: “We are proud to host the Webb Ellis Cup in India as the countdown to the Rugby World Cup 2019 gets underway.

After successfully visiting Delhi and Mumbai the Rugby World Cup 2019 Trophy Tour is now visiting the iconic city of Bhubaneswar as the international celebration of rugby continues.

“It is heart-warming to see so much support from the Department of Tourism and Sports & Youth Service, Govt. of Odisha and Odisha Rugby Football Association.

Odisha has been at the forefront of hosting numerous National Tournaments across both, the seniors and age grade categories, including SGFI’s National Schools games.

Now the State is taking a step forward and hosting the Asia Rugby Sevens Championship for Under 18 Girls in October 2018.

The sport is growing rapidly across the nation and we are hoping passionate rugby supporters from across the country and Asia will join in to witness the thrilling rugby action in Bhubaneswar.

After completing the India leg of Rugby World Cup 2019 Trophy Tour in Bhubaneswar, the trophy will travel to Japan ahead of the one year to go countdown and celebrations in September.

For more detail on the Rugby World Cup 2019 visit www.rugbyworldcup.com