Vaulting goes back to its roots

A total of 215 athletes, 60 lungers and 105 horses from 17 nations competed over five demanding days in the Lower Austrian town of Ebreichsdorf, which in 1984 played host to the first FEI European Vaulting Championships, just one year after Vaulting became an FEI discipline.

Germany’s Junior Squad powerhouse of Simone Lang-Wiegele – who won the first FEI World Cup™ Vaulting Final in 2010 – and Antje Hill secured gold on 7,876 points, with Austria hot on their heels on 7,831 points followed by Italy taking bronze with 7,544 points.

“It’s getting harder every year to win at the FEI European Vaulting Championships, as more and more nations climb up through the ranks – this is a great sign for the sport”, said German Chef d’Equipe Ulla Ramge.

To Gotye’s “Heart’s A Mess”, from the soundtrack of the new big screen adaptation of The Great Gastby, the pair finished on 8,605 points, thanks to a brand new move that saw Lindner perform a dramatic handstand on Wacha’s shoulders for over three strides. “We wanted to show something new for the Europeans in our home country”, said an ecstatic Wacha.

Denmark’s Rikke Laumann, who at 30 years old was the oldest female Senior competitor, stormed to victory in the Individual competition with a total score of 8,307 points after putting in four almost perfect, clear rounds with Ghost Alfarvad Z and lunger Lasse Kristensen.

In 1999, Laumann participated in her first FEI European Vaulting Championships, and between 2002-2005 she successively collected Individual silver medals, followed by bronze medals in 2009 and 2011, and another silver in 2012. “I still can’t believe it – it is an amazing feeling to reach this goal after such a long time and hard work”, Laumann said.

With Laumann finding it hard to fight back the tears of joy on the podium, Eccles was the first to celebrate her victory. “Congratulations to Rikke – she had the best competition!” she said.

France’s Jacques Ferrari on Poivre Vert with lunger François Athimonn, who had already shown he was one to beat in the days leading up to the deciding freestyle test, stole the male Senior Individual show, securing gold at his first FEI European Vaulting Championships.

Dressed in white and gold, Ferrari interpreted the life of Lucifer in a stylish and mysterious freestyle performance. “I’m so happy, but the medal is not everything. I want to inspire the audience with my performances. For me, vaulting is not only gymnastics, it’s much more artistic”, he said.

Germany’s 25-year-old Erik Oese on Calvador 5 with lunger Andreas Bäßler finished on silver with 8,230 points following his stirring performance to music by Prince, while Stefan Csandl from Vienna – who competed at the 2010 Alltech FEI World Equestrian Games™ in Kentucky and at the FEI European Vaulting Championships in 2011 and 2012 – was delighted to reach the podium for the first time in his career, securing bronze with 7,966 points. 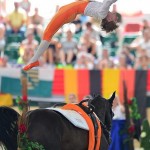 The 17-year-old Ramin Simon Rahimi from Vienna successfully defended his Junior title, despite sustaining a shoulder injury earlier this year. On Royal Salut, and with his coach and lunger Manuela Barosch he finished on 7,985 points to secure gold.

Austria’s Chef d’Equipe Manfred Rebel was ecstatic at his team’s medal haul at this year’s Championships. “I was confident we’d go home with five medals – but to get eight, with four golds, is incredible. Our vaulters have exceeded all expectations, and they really blossomed in front of their home crowd”.

Christian Kermer, President of the Organising Committee, was also thrilled: “We must extend our thanks to our 100 volunteers, who have helped to make this happen, and to the judges and coaches. Everything worked so well with such a huge number of vaulters and horses at this year’s Championships”. —- By Daniel Kaiser/ Photo: Daniel Kaiser/FEI