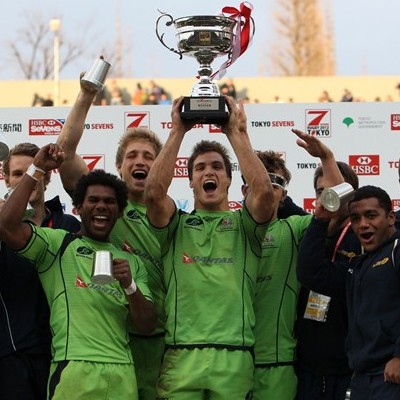 Australia strike gold, Australia defeated Samoa 28-26 in dramatic fashion in the final of the Tokyo Sevens to become the fifth Cup winners in the HSBC Sevens World Series 2011/12. 19-year-old Matt Lucas held his nerve to slot a long-range conversion in the dying seconds after his captain Ed Jenkins had crossed to level the scores.

New Zealand were knocked out by Samoa in the Cup semis but stretched their lead over Fiji at the top of the World Series. They now lead the HSBC Sevens World Series with 128 points, only six clear of Fiji. South Africa are third on 105, England are one point behind in fourth and Samoa are fifth. Australia’s victory leaves them in sixth place on 84.

IRB Chairman Bernard Lapasset was present in Tokyo and declared the event a huge success: “This tournament has been a triumph for Rugby in Japan and Asia,” he said. “We have a strong platform to work on with the JRFU to build awareness of the event and grow the fan base as we build towards Japan’s hosting of Rugby World Cup 2019. I am sure the Tokyo Sevens will go from strength to strength.”

Before the Cup final at the Prince Chichibu Memorial Ground, the pools were drawn for the Emirates Airline Glasgow Sevens, the eighth and penultimate round of the Series on 5-6 May, with Scotland set to start with games against Wales, South Africa and Russia at Scotstoun Stadium.

– Rugby in Asia going from strength to strength

IRB Chairman Bernard Lapasset says that Japan’s successful hosting of the Tokyo Sevens can be a springboard to a successful Rugby World Cup 2019 in Japan. Won by Australia, the first international Sevens event in Japan for 11 years attracted record advance sales for a Rugby event in Japan. Even horrendous weather on day one could not prevent the party on day two as bumper crowds enjoyed a superb spectacle on and off the pitch.

“There is no doubt that the Tokyo Sevens has been a resounding success on and off the field of play,” said Lapasset. “Despite the bad weather on day one, the sun shone on day two, the crowd was strong and the atmosphere electric. It was a wonderful event.” “It is clear that this event has great potential to go from strength to strength as a major attraction on the HSBC Sevens World Series calendar.” “The event also has a major role to play as a stimulus for further Rugby promotion, development and interest in the run up to RWC 2019 in Japan.”

The successful Tokyo event is another boost for Rugby in Asia and follows an outstanding Hong Kong Sevens, while more people are playing Rugby in the region than ever before. “These are exciting times for Rugby throughout Asia. Participation has grown by 18 per cent since 2007 and Rugby is taking off in China, India and Sri Lanka,” Lapasset added.