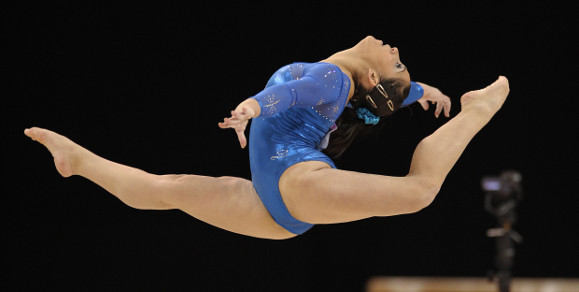 Lausanne, (SUI), July 18, 2012: Artistic Gymnastics, The London Games represent a historic possibility for the artistic gymnasts of Latin America. Could this be the first time a Latin American gymnast is awarded a medal at an Olympic Games?

The new Olympic selection procedure for 2012 has qualified a record number of gymnasts, 21, from a record nine Latin American federations. The record number is significant, but this region, where Spanish and Portuguese are the principle languages, is in search of medals. The gymnasts of Latin American have shown significant improvement over the last two to three cycles by netting several world championship medals and giving their northern neighbours, the USA and Canada, formidable competition. These Latin gymnasts are now poised for medals in London.

Latin America will be represented by double the amount of male gymnasts at the London Olympics compared to 2008.

Brazil has qualified the most individual Olympians of any federation this year, with three, after just missing the team qualification by less than 1.2 points. Their federation has two medallists from the 2011 World Championships, perhaps giving them the greatest medal hopes from the region. Arthur NABARRETE ZANETTI (BRA), age 22, has built a significant resume over the past 18 months. ZANETTI is a three-time World Championship competitor, finishing second on the rings in Tokyo and cementing his position to his first Olympic Games. He had a very prolific 2011, winning the Gold on Rings at the Universiade in Shenzhen, China and Silver on the same apparatus at the Pan American Games in Guadalajara, Mexico. Arthur and his coach, Marcos GOTO, certainly are focused on an Olympic medal on the Rings. Diego is joined by his sister, Daniele, also competing at these Olympic Games.

ZANETTI is joined in London by teammate, and four-time World medallist, Diego HYPOLITO (BRA). HYPOLITO, now age 26, has achieved all of his world medals, two Gold, on the Floor Exercise. Diego’s coach, Renato ARAUJO, agrees Diego has his best medal chance is on this apparatus, having participated in this apparatus final in Beijing and winning of the Bronze medal at the 2011 Tokyo World Championship. Diego also has an element named after him in the men’s Code of Points, the Arabian double front pike or stretched with a full twist. HYPOLITO and ZANETTI helped lead Brazil to their first Pan American Games Team Gold medal last year. However, the driving force behind their team victory came from younger Sergio SASAKI JUNIOR (BRA), posting the competition’s highest All-Around score during the team competition.

SASAKI was awarded Brazil’s MAG Olympic position based on their federation’s qualification at the Test Event. Sergio burst onto the senior international scene by finishing 19th All-Around in his first World Championship in 2009 at the age of 17. A foot injury has slowed SASAKI this year, but he and his coach, Renato ARAUJO, are focused on the goals of this three-time World Championship competitor in his first Olympic Games. SASAKI is also one of few gymnasts in these Olympic Games to have an element named after him in the Code of Points on the Parallel Bars, 5/4 salto forward straddled to hang (E value). Spectators will find this element to be one of the more spectacular being performed on this apparatus.

Daniel CORRAL BARRON (MEX) had his major medal debut just after the 2011 World Championships by winning two Gold medals at the Pan American Games on Pommel Horse and Parallel Bars, the only events in which he competed because of a foot injury. The two Gold medals propelled him to national stardom within Mexico, host country of the Games. He later went to the 2012 Olympic Test Event winning the Gold on Parallel Bars and finishing 4th in the All-Around, the highest individual All-around Olympic qualifier after the top 12 qualifying teams were determined. CORRAL, now age 22, is the first Mexican male gymnast Olympian in 20 years, the last in Barcelona. The coach of this five-time World Championship competitor, Oscar AGUIRRE JALIL, says Daniel has his greatest medal chances on Pommel Horse and Parallel Bars, two apparatus where they have made considerable increases in difficulty over the past few months.

Enrique Tomas GONZALEZ SEPULVEDA (CHI), age 26, will compete in his first Olympic Games. He and his coach, Yoel GUTIERREZ MARTINEZ, can be credited with significant All-around improvement this cycle, many considered Tomas only as a Floor Exercise and Vault specialist. GONZALEZ won the Bronze medal in the All-around at the 2011 Pan American Games, along with Silver medals on Floor Exercise and Vault. A battle for the medals on those two apparatus can be expected with his South American rival Diego HYPOLITO (BRA) and the rest of the world’s best.

Jorge Hugo GIRALDO LOPEZ (COL) is considered to be the elder statesman of Pan American Gymnastics at age 32. This will be his 3rd Olympic Games, over a career with participation in 10 World Championships. His participation in 4 Pan American Games has netted him 9 total medals, including a Silver in the All-around in 2007 and 2011. Jorge and his coach, Junsuke IWAI, have confirmed his participation on two apparatus for the Olympic Games, Pommel Horse and Parallel Bars. GIRALDO’s recent shoulder problems may have influenced this decision.

Tommy RAMOS (PUR), age 26 will be participating in his first Olympic Games. Puerto Rico had many possibilities for their selection of a gymnast and went with RAMOS, a veteran of five World Championships, primarily because of his excellence on the Rings, Bronze medal at the Test Event earlier this year. Although RAMOS is proficient at many apparatus, Rings is his specialty where he has been a finalist in the last two Pan American Games. His coach, José COLON, with participation in his sixth Olympic Games, has the experience to create a strategy to help Tommy make the finals on Rings and hopefully medal.

Federico MOLINARI (ARG), age 27, is Argentina’s first male Olympic gymnast since 1996. His coach, Vladimir Makarian will be participating in his 4th Olympic Games dating back to 1976. MOLINARI, a veteran of five World Championships, also has an element with his name in the Code of Points. This element is a Kip to V Cross (D value) on the Rings, his best apparatus.

Brazil is the only Latin American federation qualifying a team, male or female, to the 2012 Olympic Games. The ladies from Brazil are also the only Latin American team ever to make an Olympic Team Final, doing so for the first time in 2008 and finishing 8th, after narrowly missing the Final in 2004. This team’s success comes at a good time as Rio de Janeiro prepares for 2016. Team Brazil hopes to improve on their ranking this year.

Brazil’s coaches, Ricardo Pereira and Iryna Ilyashenko, aside from their team goals, recognize their country’s best medal chances rest with the balance beam and vault apparatus. They have veteran team leaders to help guide the team with Daniele MATIAS HYPOLITO (BRA) and Daiane DOS SANTOS (BRA).

Hypolito will be participating in her 4th Olympics, a remarkable accomplishment for any gymnast, and at the age of 27. Even more remarkable, she has competed in every World Championships since 1999, and was Brazil’s first world medallist in 2001, a Silver on Floor Exercise.

Daiane DOS SANTOS adds a double dose of experience to Team Brazil. She was Brazil’s first World Champion, Floor Exercise in 2003, where the world truly noted her explosive power. Dos Santos also has two elements named after her in the women’s Code of Points, Arabian double front in the pike and layout positions. This 29 year old will be competing in her third Olympics, qualifying to the Floor Exercise final in both 2004 and 2008.

The Brazil team is rounded out by Ethiene Cristina GONSER FRANCO, Bruna KUROIWA YAMAMOTO LEAL, and Adrian Geovana NUNES GOMES. Ethiene will participate in her 2nd Olympic Games, plus both Bruna and Adrian have participation in multiple World Championships, but Brazil will miss the experience of Lais SOUZA and Jade BARBOSA in London.

Yamilet PENA ABREU (DOM), age 19, burst onto the top international scene at the 2011 World Championships, her first. PENA qualified to the Vault finals as the second gymnast ever to compete the Produnova vault, handspring double front. She holds the honor of being the first gymnast, male or female, from the Dominican Federation to qualify for an Olympic Games. PENA and her coach Francisco SUSANA SANCHEZ have high hopes for qualification and a medal on Vault in London.

Jessica LOPEZ (VEN), age 26, will be participating in her second Olympic Games. She already has the experience of five World Championships and a bronze medal on Uneven Bars at the 2011 Pan American Games. Jessica and her coach, Nilson MEDEIROS, are veterans of the international competition circuit. Both are relieved by the qualification for the London Games because Jessica competed with a broken foot at the Test Event earlier this year.

Ana Sofia GOMEZ PORRAS (GUA), age 17, is an example of how a gymnast could use the 2010 Youth Olympic Games as a springboard to success in the sport. Ana was the Silver medallist in the All-around and Gold medallist on the Balance Beam at the 2011 Pan American Games. Her coaches, Adrian and Elena BOBOC, must be proud of helping Guatemala return to the Olympic Games in Gymnastics after two decades of none qualification.

Elsa GARCIA RODRIGUEZ BLANCAS (MEX), age 22, will compete in her first Olympic Games. She has participated in every World Championship since 2006, a total of five. This three medal winner at the 2011 Pan American Games is fortunate to being going to London. She suffered a hyperextension of a knee warming up for the Vault Apparatus Final at the Test Event. Her recovery took four months. Elsa and her coach, Jose Antonio MARTINEZ BARRAZA, share the objective of trying to qualifying to the finals in the All-around and one apparatus in London.

Jessica GIL ORTIZ (COL), age 22, will be participating in her first Olympic Games, also participating in every World Championship since 2006, a total of five. She was an Apparatus Final qualifier, Floor Exercise, at the 2009 World Championships. Jessica and her coach, Maria GONZALEZ, have had to overcome some major setbacks in recent months with a knee injury and an operation for removal of a cyst. Jessica has not allowed these setbacks prevent her from representing her country with pride in London.

Simona CASTRO LAZO (CHI) will be participating in her first Olympic Games also. She does carry the experience of participation in five World Championships. Currently she is a university gymnast in the USA at the University of Denver and will be accompanied by one of her coaches, Carl LELAND. In January she celebrated her 23rd birthday by becoming the first Chilean woman to ever qualify to the Olympics in Gymnastics. This had to make her former coach, her mother Isabel, celebrate with pride.

Valeria PEREYRA (ARG), age 16, will see the London Olympics as her first major senior level competition. She will be one of the younger athletes participating in the women’s competition. A trait she shares with her coach, Daniela CONDE, who will likely be one of the youngest coaches for Gymnastics, but also recognised throughout the region as a coach of the greatest potential.

The 2016 Olympics will return to Latin America after a 48 year hiatus when the Games go to Rio de Janeiro, Brazil. The Latin American gymnasts are on the edge of winning their first Olympic medal this summer. Could this be the catalyst for even greater accomplishments in Rio? This region has high expectations, enormous passion, and exceptional talent. The London Games start in a few days and the largest Latin American surge for an Olympic medal in history can be expected. —– FIG/By Steve Butcher: Vice President Pan American Gymnastics Union& FIG MTC member