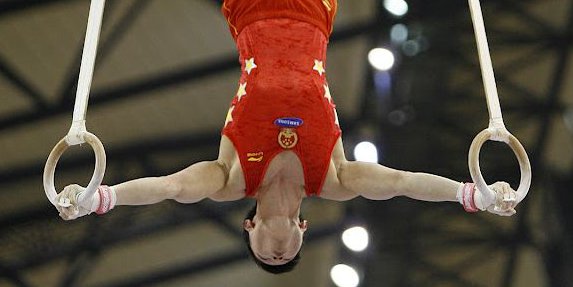 LAUSANNE (SUI), March 30, 2012: Artistic Gymnastics Challenge Cup, With day one of the Finals behind us, gymnasts from nine different nations share the medals at midway point of the FIG Challenge Cup stopover currently taking place in Doha (QAT).

China’s Zou Kai, who qualified in fourth place, improved his execution significantly to top the field and take Gold on Men’s Floor Exercise. He was followed by top qualifier Tomislav Markovic (CRO) and Vlad Cotuna of Romania, who also improved on his work in the preliminaries.

On Pommel Horse, Slovenian Saso Bertoncelj confirmed his pole position, defeating Liao Qiuhua of China who won the Silver after having qualified in 7th rank only. Cyril Tommasone of France was consistent in third place and took home the Bronze. Second in Qualifications, Robert Seligman of Croatia fell off the apparatus in the Final and down to last place in the ranking. 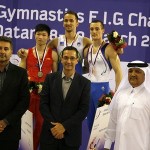 Having come from 6th place in Qualifications, China’s Liao Qiuhua improved in Thursday’s Rings Final to outscore the field and take the title. Davtyan Vahagn of Armenia was second, while his compatriot Artur Tovmasyan fell back to fourth place and topqualifier Danny Rodrigues (FRA) settled for third in the Final.

Giulia Steingruber of Switzerland impressed in the Women’s Vault Final, scoring a total of 14.662 and gaining the lead on her nemeses by almost one point. Germany’s Nadine Jarosch and Teja Belak of Slovenia both moved up one position from the preliminary rounds for the Silver and Bronze respectively. Kirsten Beckett (RSA) had qualified in second place, but fell back to rank four in the Final.

The Final on Uneven Bars reflects the ranking in Qualifications, with Beth Tweddle (GBR) taking the Gold, followed by China’s Jiang Yuyuan in second and Lisa Katharina Hill of Germany in Bronze medal winning third place. Ahead of the field by .9 points in preliminaries and impressing with a 7.000 Difficulty value, Tweddle tried different elements in the Final and made some mistakes that shrunk her lead. 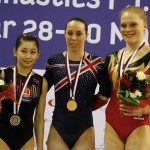 Organisers of the Qatar Gymnastics Federation are outdoing themselves as they host a tournament held at the impressive Aspire Dome for the fifth consecutive year; the venue provides fantastic facilities for gymnasts and professional service for fans and spectators. Follow the action worldwide via online live streaming (embedded at the event website http://www.dohagym.com/), on Facebook https://www.facebook.com/DohaGym and Twitter @DohaGym and check in for live results on your mobile device.

The competition concludes on Friday with the second day of event Finals, featuring on the Men’s side top qualifiers Du Wei (Men’s Vault), Guo Weiyang (Parallel Bars) and Zou Kai, all from China, as well as top scorers Catalina Ponor (Balance Beam) and Diana Laura Bulimar (Floor), both representing Romania in Women’s.