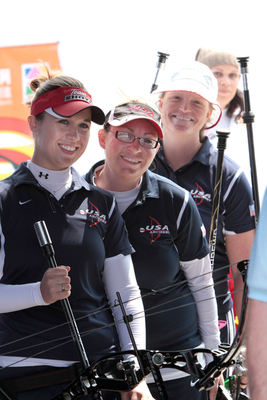 This year the Archery World Cup comprises three stages instead of the usual four. The first leg took place in April in Shanghai (CHN) and the final leg will be held in Ogden (USA) in June. The fact that the London 2012 Olympic Games are just a little more than three months away is an important factor of motivation for our recurve athletes and this event may act as internal selection for the Games for some of the top teams. Let’s now have a look at the favourites for Antalya.

On the team’s side, the Korean favourites will try to recover their title after placing only 4th in Shanghai. Their most dangerous contenders will be the top three from Shanghai USA, France and Ukraine as well as India.

On the team’s side, Korea is the powerhouse. They just won the team competition at the Shanghai World Cup. They will be challenged mainly again by India and China.

On the team’s side, no one seems able to stop the five-time world champions USA. Other contenders for a podium are France, the surprise third from Shanghai Venezuela, as well as Denmark, Great Britain, Canada, Netherlands, Italy, and Russia.

In this category there could be a battle between the rising star Marcella TONIOLI (ITA), winner in Shanghai, and the runner-up, current world champion Albina LOGINOVA (RUS). Their most dangerous rivals will be the 2011 World Cup Final winner Erika ANSCHUTZ (USA), the 2011 world silver medallist Pascale LEBECQUE, as well as Ivana BUDEN (CRO), Gladys WILLEMS (BEL), Linda OCHOA (MEX), and Jamie Van NATTA (USA). Iranians Parsamehr MAHTAB and Seyedeh HALIMIANAVVAL are also among the favourites, as well as the third archer from Shanghai Diane WATSON (USA) and her compatriot Christie COLIN, who came back from a break at the international level in 2011 to win the silver at the last World Cup Final.

In the team competition, the favourites to climb the podium are the three medallists from Shanghai: USA, Russia and Italy.

The Longines Prize for Precision will be awarded this year to the two recurve athletes (one man, one woman) who shoot the most 10s during the World Cup. Stay tuned on www.worldarchery.org for our inside coverage of the Archery World Cup Stage 2 in Antalya from 1-6 May.