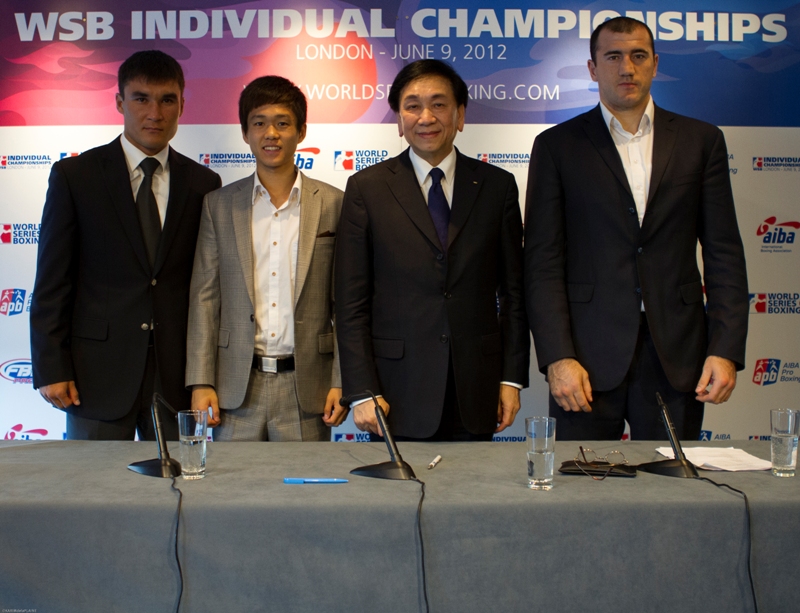 “This is a historical moment of our sport to sign the 1st three top ranked boxers for newly initiated program, the AIBA Professional Boxing. We truly appreciate for their determinations to stay in the program under the umbrella of the International Boxing Association although there have been several attractive offers given to these boxers from other professional boxing promoters”, Dr Ching-Kuo Wu, AIBA President said. “I also appreciate for their National Federations who fully supported their decisions to continue their careers with us. Without the National Federations and coaches’ supports, we would not have these boxers in our programs.” Dr Wu continued.

The most stellar of these names is 25-year-old Azeri Magomedrasul Medzhidov, the current Super Heavyweight World Champion, who lit up the AIBA World Boxing Championships Baku 2011 with his sensational run to the final where he went on to take the gold medal after a thrilling battle with England’s Anthony Joshua. Medzhidov relentless style also saw him take the WSB by storm in its first season, establishing himself as one of the leaders in the Baku Fires squad, qualifying in the process for the Individual Championships. The 190cm tall, 6ft3in, orthodox fighter will be one of the main challengers for the gold medal at the London 2012 Olympic Games. Described by many as having the heart of a lion and absolutely no fear in the ring, he is pure boxing box office and is currently the top fighter in the AIBA ranking.

When asked if he was ready for APB following his experience in the WSB, Medzhidov replied, “Indeed the World Series of Boxing has helped me a lot because it gave me the opportunity to try pro style boxing. In WSB you fight without vest, without headguard and for 5 rounds, not only 3 like in Olympic boxing. Last year I even fought for 7 rounds in the WSB Individual Championships and I was actually getting better and better after each round. So yes, the WSB has helped me a lot and I feel now 100% ready to turn pro with APB”.

Kazakhstan legend Serik Sapiyev, at 28 years of age, is already a veteran of four AIBA World Boxing Championships, having been crowned a World Champion twice in 2005 and 2007 before taking bronze in 2009 and most recently silver in 2011. This powerful Welterweight’s silky smooth technique has made him one of the most feared boxers in the world and has still to reach his peak. The 179cm tall, 5ft10, southpaw delights crowds whenever he takes to the ring, with his fancy footwork, he relishes taking charge and dictating his bouts, always looking to pick his opponents apart with some classy combination punches. Having now matured into a good all-rounder, his presence in the APB ranks will ensure quality of the highest calibre when the season gets underway.

Asked why it took him so long to turn pro, Sapiyev declared, “There are so many stories of amateur boxers turning pros with the wrong promoter that then completely destroy their career. I really enjoyed my Olympic career and I want to finish it with a medal in London. But now I have the feeling that what AIBA is offering with APB is just the right thing. I will stay very close to my National Federation and under the same governance with the International Boxing Association. It is a safe plan of career and every sportsman needs this”.

Ranked as the top Light Flyweight, 23-year-old Jong-Hun Shin won bronze at the AIBA World Boxing Championships Milan 2009 before going one better and taking the silver medal last year. He is the reigning Asian Games Champion and is an electric performer at the highest level. There is no doubt that Shin is the rising star and poster-boy of the sport in his native South Korea with this orthodox 169cm tall, 5ft6½, fighter one of the most focused athletes in the division. Tireless, highly effective and with an array of combination punches in his arsenal, he is the leading contender to take the gold medal at the Olympic Games this summer.

Shin was keen to state, “I have been improving my skills a lot over the past 3 years. I came from bronze to silver medal between the last two world championships and I really hope I will have an even better performance at the Olympic Games. But now I need a little bit more of media exposure to fully give a kick to my career. I want to become a star and become famous worldwide. And I know that APB will give me this exposure in a very transparent and respectful competition.”

These three signing are only the beginning for APB with several other big names to follow before and during the London 2012 Olympic Games as the competition gets serious before its launch in Fall 2013.

At the closing remark, AIBA President emphasized, “We will support the boxers, National Federations, Coaches, R&Js, any officials and members who decide to live and breathe with us. We will take care of these boxers, officials and members as long as they are with us for the best interests and benefits of our sport and organization in the future. I truly like to see more boxers to give the trust and loyalty on AIBA and APB.”