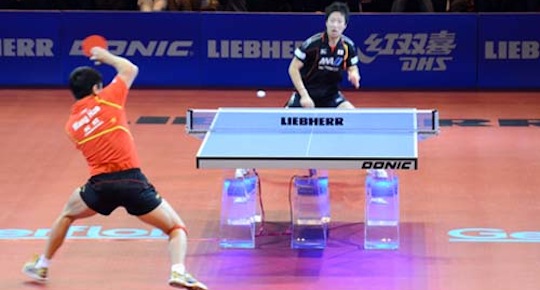 Lausanne, May 03, 2012: Selected for the LIEBHERR Men’s World Cup, staged in Paris in November 2011, the German manufacturer DONIC will once again be the table sponsor and supplier in 2012 when the tournament is staged in Liverpool from Friday 28th to Sunday 30th September.

Not only will DONIC be the sponsor in 2012; brokered by TMS International, the marketing partner of the International Table Tennis Federation, DONIC will be the table sponsor and supplier for the prestigious competition for a further three years.

“The ITTF is extremely pleased that DONIC took the initiative and requested an extension to the sponsorship as the table supplier for the Men’s World Cup”, said Adham Sharara, ITTF President. “This initiative was received with open arms by the ITTF, as we look for a long term partnership with DONIC and innovative table designs; it goes without saying that DONIC provides “state-of-the-art” tables for this prestigious ITTF World Title event.”

Notably Sweden’s Jan-Ove Waldner and Jrgen Persson are two of the most celebrated names the company has supported. More recently, two of Europe’s most exciting young players Germany’s Dimitrij Ovtcharov and Russia’s Kirill Skachkov, have signed contracts with.

“The Men’s World Cup is one of the most important and image enhancing tournaments on the world table tennis circuit”, said Frank Schreiner, the President. “We are very pleased that the ITTF has confidence in our brand and has agreed to prolong the agreement as the table supplier for the Men’s World Cup for further five years.”

Confidence in the brand most certainly, the company has a reputation for excellence with the International Table Tennis Federation not being the only organisation to place faith in the company.

“As table supplier at various European Championships, 2012 in Denmark and 2013 in Austria, it is very important for us, as one of the most renowned brands world-wide, to be also present at ITTF world events”, added Frank Schreiner.

It is a global brand, most recently the company was the equipment sponsor of the GAC GROUP 2012 ITTF World Tour Spanish Open in Almeria.

“We are very pleased to extend this agreement until 2015, it fits our aim perfectly to have partners that commit long-term to ITTF World Title properties”, said Anders Thunstrm, Managing Director, TMS International. “When DONIC asked us to look for an opportunity to reach an agreement until 2015, we did not hesitate to contact the ITTF and see if a deal could be made”.

The contact was made, the deal was signed, DONIC is the sponsor and supplier for the LIEBHERR Men’s World Cup for the next four editions.

DONIC believes in quality, innovation and speed. To be the first on the market with a new product is DONIC’s tradition. Permanent innovations for more than 25 years have powered DONIC to one of the most renowned table tennis brands in the world. Photo by Vincent Kovacss