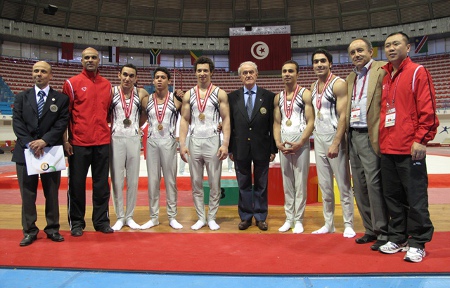 Observing the championships, the President of the African Gymnastics Union (UAG), Mohamed Yamani (ALG), said he was pleased with the effective running of the event and with the presence of FIG President Prof. Bruno Grandi (ITA). 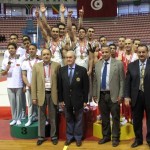 Mr Yamani was most excited about the progress being made by his gymnasts. “We saw fantastic exercises performed with masterful technique, up to par with the international level throughout the various competitions. More than ever before, the African federations need to pool their resources to move beyond their current level; we need to take a more significant stand on the international scene. Examples to follow are Ferdjani of Algeria, Boualegue of Tunisia and El Saharti of Egypt.”

Young junior gymnasts, new talent you can bet on, brought forth admiration from spectators and connoisseurs present onsite. Solid performances all around as the gymnasts mastered superior difficulties and posed a threat upward through the hierarchy! The countries represented in Tunis can count on a promising future of quality gymnasts providing they continue to work hard and receive the means they need to properly prepare.

Mohamed Yamani went on to say that “it is important to emphasise at these Championships that the burgeoning federation of Congo-Brazzaville (CGO) participated for the first time. There is no doubt that their contact with others and level of competition has allowed these newcomers to soak in the atmosphere of continental events.” In 2015, the 12th African Championships are slated for Congo, in the capital city of Brazzaville.

At the close of competitions in Tunis, an official ceremony was held in honour of the five African gymnasts representing Africa at the Olympic Games in London. The President of the African Gymnastics Union presented each one with a personalised medal of gratitude. Image © UAG