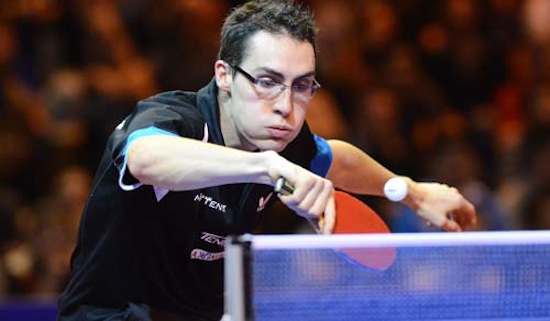 Liverpool – England, Sept 27, 2012; On duty in Paris just under one year ago, Adrien MATTENET of France is the latest inclusion in the list of 16 players who will compete in the LIEBHERR Men’s World Cup which starts in Liverpool on Friday 28th September 2012. He replaces Singapore’s GAO Ning and undoubtedly the tall Frenchmen will thrill the crowds in the Echo Arena.

Right handed, a topspin player in the true European traditions, he is a favourite wherever he play and at the LIEBHERR Men’s World Cup in Paris, in November 2011, he both entertained and excelled.

In the first phase of proceedings, he stole the show; in a dynamic fashion he beat both Vladimir SAMSONOV of Belarus and Chinese Taipei’s CHUANG Chi-Yuan to finish in second place in his group. Top place went to Jun Japan’s Jun MIZUTANI, the only player in the group stage against Adrien MATTENET suffered defeat. Second place in the group meant he qualified for the main draw.

However, at the quarter-final stage progress was halted by the champion elect, the future Olympic champion, China’s Zhang Jike. The total prize fund for the LIEBHERR Men’s World Cup is US$150,000 with the winner taking away US$45,000 and the runner up US$25,000. Play concludes on Sunday 30th September 2012 with the venue being the Echo Arena.

Confirmed Players: The confirmed list of players is as follows: