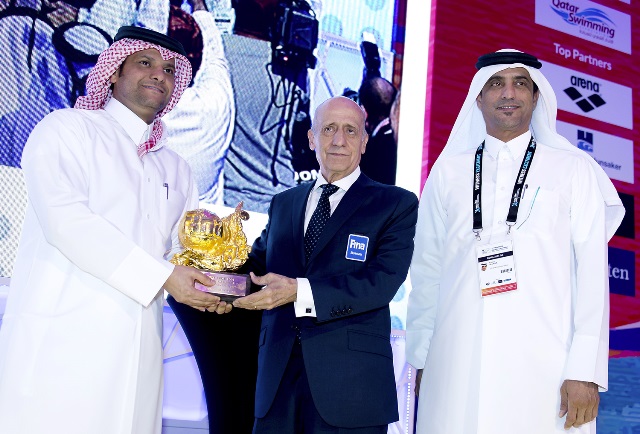 During three days, delegates from the FINA National Federations will have a unique opportunity to exchange ideas and knowledge about many strategic areas for the development of Aquatics in the five continents – administration, marketing, sponsoring, media, bidding and organisation of events. Running in parallel with the Conference programme – including prestigious lecturers -, an exhibition hall, displaying booths of commercial partners associated to the FINA world, is installed outside the Convention in the Ritz-Carlton of the Qatari capital.

“We would like, first of all, to welcome all delegates and FINA Family to Qatar. We hope you enjoy our hospitality and that you have a rewarding time in Doha”, said the Sheik Al-Thani, when addressing to the participants in the Convention. Underlining his country’s vocation to host major international events, the Qatari responsible mentioned another area where additional effort is deployed: the youth. “In co-operation with FINA, we are having here in Doha a special Youth Programme for swimmers aged 14-16. We want to inspire them and to set a reference for the future”, considered Sheik Al-Thani, who expressed his will of repeating this initiative on a more regular basis.

In recognition of his co-operation and continuous support to FINA activities, he was then awarded the FINA Prize by Dr. Julio C. Maglione.

The FINA President explained to the audience the goal of this Convention. “The purpose of the World Aquatics Convention is to implement one of the main objectives of FINA’s strategy: the active support to our 207 national member federations in the five continents, and to all our aquatic disciplines”, said Dr. Maglione. “The second goal of this Convention is to continue and improve the collaboration with our partners. We need to establish new strategies for the future, so that we can find the best possible way to enhance the importance of Sport and the value of FINA”, noted the FINA President.

The Opening session of the Convention was completed by the presentation of Prof. Jan-Anders Manson, who spoke about Innovation in Sport. Chairman of the FINA Swimwear Approval Commission, he recalled the challenging balance between the evolution of sport and the new developments in technology. He concluded his lecture by underlining the two main actors in this process: the athletes and the fans following the sport. —- Photo: Giorgio Scala/Deepbluemedia