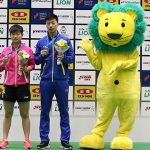 “I’m excited about winning this, especially having to come back from 1-3 down at the start. It never crossed my mind that I could win both the Singles & Doubles Gold here in Tokyo,” stated the Chinese teenager.

“I think because it’s my first senior event, I have no pressure or mental burden. I was just playing my best for each & every match.”

In a rematch of the World Championship’s dramatic final, reigning World & Olympic Champion MA Long (CHN) repeated his success against world number two FAN Zhendong (CHN) to finally claim his first Japan Open crown, the title that has been eluding him for years.

“Of course, I’m feeling very happy about this title, my first Japan Open Singles title. I finished second 10 years ago, so it feels great that I finally broke this curse.”

The China Open will be the third platinum event of the Seamaster 2017 ITTF World Tour which features 12 events across the world in 2017 plus a World Tour Grand Finals, which only the top 16 male and female players from the 12 World Tour events qualify for. —- ITTF