The Qatari capital of Doha is busy preparing to host its next large multisport event, the 12th edition of the  in December later this year. The multi-sport event will involve some 7,000 athletes from 22 Arabic countries competing in 35 sports. Director of Media and Broadcast for the 2011 Arab Games, Abdulla Yousef Al-Mulla, hopes the event will also be a positive for Arab states in the midst of difficult times. “Other Arab countries wanted Qatar to host the Arab Games to help turn them around. It will be a landmark in the history of the Arab Games.

“When Qatar turned around the Asian Games (in 2006) it was a landmark, and even China had to work hard to reach the same level (in Guangzhou in 2010). We want to do the same with the Arab Games.” “Sport is about getting together and enjoying it.”

The legacy of the highly successful 2006 Asian Games will be on display in the form of 20 venues, and the event will include the Paralympic sports of athletics, table tennis and powerlifting. “We want para-athletes to feel part of the community and we want to involve them in the games,” said Al-Mulla.

One of those existing venues in Doha is the Aspire Zone, which is also home to the newly established and high-tech Anti-Doping Lab Qatar. Sports scientists at ADLQ are currently undertaking an extensive research project to help improve the World Anti-Doping Agency’s biological passport model for athletes, and the lab will soon be added to the elite list of WADA-accredited facilities worldwide and serve all the Gulf and West Asia.

Conscious of the important role of media at large sporting events, Al-Mulla spoke of the specific preparations being made for broadcasters, written press and photographers. “We are planning for the best services for media because they are our mirror.

We are reflected in their opinion,” he said. “We always welcome their feedback, even if it is negative, because we learn for the next event.” 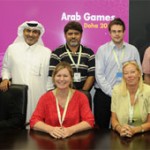 “The media are important because they go back to their countries and talk about Doha. And especially now that we are preparing for (the FIFA World Cup in) 2022, we are going to prove the type of event that can be hosted in Doha.” For the 2011 Arab Games, the Local Organising Committee in Doha has engaged Laurel International Management to provide the media operations and services component of the project.

There are more than 25 major sporting events held in Doha every year – some multi-sport events and others single sports – but the Qatar Olympic Committee regularly sends delegates to other international events as well to learn how to serve clients, including the media. Al-Mulla confirmed that team sports at the 2011 Arab Games would also be considered qualifying events for the 2012 Olympic Games in London.

When asked about the possibility of Qatar one day hosting an Olympics, Al-Mulla was hopeful. “It is a dream. After the FIFA World Cup, it’s the Olympics. Every Qatari dreams of hosting the Olympics. As a citizen I personally have attended so many and it is a great event. And the hosting country is lucky to have it.”

* The 2011 Arab Games will be held from December 9-23, 2011. Broadcasters Al Jazeera and the Local Organising Committee are working to broadcast the event live via the Internet.