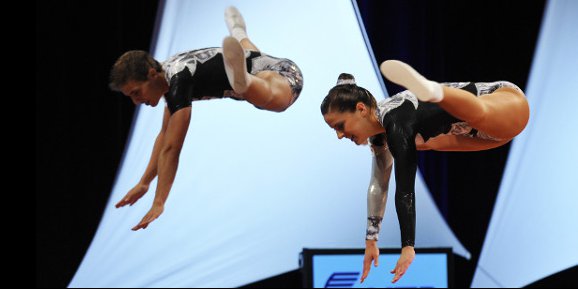 With the 2010 champions in the Men’s and Women’s Individual categories, Morgan Jacquemin (FRA) (retired) and Marcela Lopez (BRA), out of the 2012 line-up, Aerobics will see new faces on the podium this year. Will Rodez runner-up Mircea Zamfir (ROU) take the Men’s title in Sofia? Will France’s Benjamin Garavel follow in his compatriot’s footsteps? Or will Spaniard Ivan Parejo, who won the recent World Cup in Tokyo, make it? We will have the answer on June 3, after the Finals.

Of the 54 participants in Women’s Individual, several contenders are among those aiming for the title. Italy’s Giulia Bianchi, 2010 World Silver medallist, is registered, but we have yet to see her compete on the world stage this year; and Sara Moreno of Spain continues to hold her own after having won the Tokyo World Cup in April. This said, 2006 World runner-up, Huang Jinxuan of China, second in Tokyo, and France’s Aurélie Joly, 2012 World Cup winner of Aix-les Bains, also count among the favourites.

In Mixed Pairs, Moreno and partner Vicente Lli will try to defend their titles against Joly and Julien Chaninet, 2010 runners-up and winners in Tokyo, as well as Romania’s Tudorel Valentin Mavrodineanu with his new partner Maria Bianca Becze.

China, Romania and France stay the main medal contenders in Trios and Groups, however not without fierce competition from Russia, Korea and Vietnam (Trio only).

We look forward to seeing Aerobic Step and Aerobic Dance integrated for the first time at a World Championships, and welcome delegations from Chile, Colombia and India back after their absence from Rodez. Picture © FIG