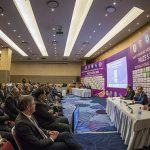 As the cold snap takes hold in St. Petersburg, the second largest city in Russia and former capital city, the top-16 judoka in each weight category in the world have been invited to the season-ending World Judo Masters which offers the most World Ranking List points on the IJF World Judo Tour after the World Championships.

A prestigious gold medal at the two-day season finale offers 1800 points with silver worth 1260 and bronze coming in at 900 points. The appeal of ending the year in pole position with number one spot on the World Ranking List comes with an added bonus this year as all 14 top-ranked judoka at the end of the year will each scoop an extra $50,000 in prize money. A total of $200,000 in prize money will be divided amongst the medallists at #JudoMasters2017 during the weekend.

The World Judo Masters is one of the premier showcases of judo with the stars of the circuit in action including Olympic and world champions. The draw took place on Friday afternoon where it was announced that 214 judoka (109 men and 105 women) from 46 nations would be heating up proceedings as the seasonal and expected snowfall hits Russia.

Mohamed MERIDJA, IJF Education and Coaching Director (below – centre), opened the draw with a speech on behalf of the International Judo Federation.

“Dear guests, judo friends, ladies and gentlemen, on behalf of the IJF President Mr. Marius VIZER, I express my warmest welcome to you all to the World Judo Masters 2017 in St. Petersburg. The city will be the capital of the judo world this weekend, in the middle of December, and the first edition of the Masters here will be a very important event. I wish you all the best of luck this weekend and a good stay in Russia.”

“Dear friends, on behalf of the Russian Judo Federation, I warmly welcome you all to Russia. We are very pleased to see you all in St. Petersburg and for this I would like to thank the IJF President Marius VIZER. Russia has staged this competition before, in Tyumen in 2013, and this experience will be valuable for us.

St. Petersburg is the original city of our President of the Russian Federation, Mr. Vladimir PUTIN and we are delighted to be here to host the last IJF event of the season.”

Olympic champions Rafaela SILVA and Khasan KHALMURZAEV (RUS) will be in action along with world champions HASHIMOTO Soichi, TONAKI Funa (both JPN), Clarisse AGBEGNENOU (FRA) and Mayra AGUIAR (BRA) who are all among a star-studded cast for IJF’s swansong in 2017.

WOMEN -48kg
World number one MUNKHBAT Urantsetseg (MLG) will be buoyed by her silver medal from the Tokyo Grand Slam as she is within touching distance of finishing the year in pole position. Mongolia’s first female world judo champion is ready for her eighth and final competition of 2017 and will be bidding for her second World Judo Masters title having won in Morocco in 2015.

World number two Otgontsetseg GALBADRAKH (KAZ) was due to compete but picked up an injury at the Tokyo Grand Slam and will have to wait to make her World Judo Masters bow. World champion TONAKI Funa (JPN) took bronze at her home Grand Slam as former world champion KONDO Ami (JPN) was Japan’s first winner at home. TONAKI, even with her red backpatch, has to capitalise on every international selection for her country with a two-year battle in the making for the sole -48kg spot at Tokyo 2020.

-52kg
World number one Erika MIRANDA (BRA) took bronze at the World Championships in August and will hold on to top spot in the rankings with a win in St. Petersburg. MIRANDA, 30, took silver at the Abu Dhabi Grand Slam in her last competition and should open her World Judo Masters medal account on Saturday.

Tokyo Grand Slam bronze medallist Amandine BUCHARD (FRA) is in form while TSUNODA Natsumi (JPN) needs a performance after finishing seventh in Tokyo. Rio 2016 Olympic bronze medallist Natalia KUZIUTINA (RUS) is the most dependable judoka in Russia’s women’s team and won the World Judo Masters event in 2015, which was followed up with silver last year.

-57kg
World champion DORJSUREN Sumiya (MGL) is a three-time World Judo Masters winner and looks poised to make a strong tilt for a fourth victory on Saturday. DORJSUREN wore her new red backpatch at the Abu Dhabi Grand Slam and it was a comfortable fit as the Mongolian powered to gold. The 26-year-old will have two of her toughest rivals for company in St. Petersburg with Tokyo Grand Slam winner YOSHIDA Tsukasa (JPN) and Olympic champion Rafaela SILVA (BRA) both bidding to close the 2017 season with gold.

DORJSUREN lost to SILVA in the Olympic final but beat YOSHIDA in the World Championships final after a then-record nine minutes of golden score. Ekaterinburg Grand Slam winner Miryam ROPER (PAN) will be one to watch after some sparkling displays on the tour this year since switching from Germany to represent Panama.

-63kg
World champion Clarisse AGBEGNENOU (FRA) took part in the post-Tokyo Grand Slam training camp having sat the competition out to nurse a minor injury. The 25-year-old makes her return this weekend since becoming a two-time world champion and is competing at the Masters for the first time.

-70kg
World number five Marie Eve GAHIE (FRA) is the top seed for the first at the World Judo Masters and will be aiming to win her first IJF World Judo Tour medal since February when the 21-year-old Frenchwoman took silver at the last Dusseldorf Grand Prix. Olympic Bronze medallist Sally CONWAY (GBR) and Abu Dhabi Grand Slam winner Anna BERNHOLM (SWE) have also been invited to the competition while 2016 Masters bronze medallist KIM Seongyeon (KOR) will be looking for a return to form in the final event of the year.

-78kg
World number one Guusje STEENHUIS (NED) captured the world lead with a silver medal at the Tokyo Grand Slam. STEENHUIS, who overtook Abu Dhabi Grand Slam winner Natalie POWELL (GBR) in December, won bronze at the Masters a year ago and will be aiming to stand higher up on the podium in order to retain her top billing. World champion Mayra AGUIAR (BRA) had to settle for bronze at the Abu Dhabi Grand Slam in October but is a two-time Masters winner and always steps up when she needs to the most.

+78kg
The Hague Grand Prix winner Tessie SAVELKOULS (NED) has been one of the Netherlands’ most consistent performers in 2017 with two Grand Slam wins and a Grand Prix victory under her belt along with fifth-place finishes at the World Championships and Openweight Worlds. The 25-year-old world number two finished seventh at the Masters last year but is a whole different proposition in 2017 and will command the respect of everyone in the weight category.

MEN -60kg
World silver medallist Orkhan SAFAROV (AZE) has made winning major medals a habit this year but has had to pull out on the eve of the competition due to sickness. Abu Dhabi Grand Slam winner Robert MSHVIDOBADZE (RUS) competes at the Masters for the first time since 2013 when he lost his opening bout and exited the competition at the first hurdle.

Tokyo Grand Slam silver medallist DASHDAVAA Amartuvshin (MGL) – who turned 30 today – has been lighting up the -60kg category recently with a series of stunning ippons with his uchi-mata being a particular highlight and can cause problems for any judoka in the stacked field. World number nine NAGAYAMA Ryuju (JPN) took bronze at the Tokyo Grand Slam last time out and makes his World Judo Masters debut on Saturday.

-66kg
World number one and Abu Dhabi Grand Slam winner Tal FLICKER (ISR) makes his Masters debut on Saturday and will be intent on continuing a breakout year on the IJF World Judo Tour. World bronze medallist Vazha MARGVELASHVILI (GEO) finished fifth in Tokyo and is also appearing at the top-16 event for the first time.

Three-time world silver medallist Mikhail PULIAEV (RUS) will look forward to a home finale after another frustrating day at the World Championships which saw him come up just short for the third time. Five-time Grand Slam medallist Charles CHIBANA (BRA) graces the Masters for the first time and could lead Brazil’s charge in Russia.

-73kg
World champion HASHIMOTO Soichi (JPN) steps straight back into action after his two-year winning-streak was abruptly ended at the Tokyo Grand Slam as he finished with bronze. The 26-year-old, who is the reigning Masters champion, lost to 20-year-old teammate TATSUKAWA Arata (JPN) in the semi-final before winning his bronze medal contest. Olympic and world silver medallist Rustam ORUJOV (AZE) is a two-time World Judo Masters bronze medallist and will want to improve on that this year as he continues to search for a way past his Japanese rivals.

World bronze medallist GANBAATAR Odbayar (MGL) won the Abu Dhabi Grand Slam in October before finishing fifth at the Tokyo Grand Slam while European champion Hidayat HEYDAROV (AZE) will also be a judoka to watch as he competes at the Masters for the first time. London 2012 Olympic champion and Rio 2016 bronze medallist Lasha SHAVDATUASHVILI (GEO) will also be in the mix and Tokyo Grand Slam silver medallist Arthur MARGELIDON (CAN) will be hoping that his recent exploits in Japan will be a catalyst for major medals on the IJF World Judo Tour.

-81kg
World number one Frank DE WIT (NED) won his fifth Grand Slam medal with a third-place finish at the Tokyo Grand Slam and enters his first World Judo Masters with control of the weight category. The 21-year-old is joined at the last IJF event of the season by world number two Saeid MOLLAEI (IRI) and Tokyo Grand Slam winner OTGONBAATAR Uuganbaatar (MGL) who is ranked third in the world.

World number four Alan KHUBETSOV (RUS) finished fifth at the Masters last year and needs to better that result this time around. Olympic champion Khasan KHALMURZAEV (RUS) won the Ekaterinburg Grand Slam on his return to IJF duty and took bronze at the World Championships in Budapest.

-90kg
World number one Aleksandar KUKOLJ (SRB) slipped to defeat in the second round at the Tokyo Grand Slam after just recovering from a dip in form by winning The Hague Grand Prix. European champion KUKOLJ has never medalled at the Masters and will be out to end his mixed year on a high. World bronze medallist GWAK Donghan (KOR) is the only male member of South Korea’s nine-strong team and competes for the first time in the top-16 event.

-100kg
World number one Michael KORREL (NED) took silver at the Tokyo Grand Slam and should improve on his seventh-place finish at the Masters from a year ago. Olympic bronze medallist Cyrille MARET (FRA) weighed 117kg at the Openweight World Championships in November but has worked tirelessly to return to his usual weight category of -100kg after briefly flirting with the idea of making the switch to the heavyweight category.

+100kg
World number one David MOURA (BRA) has led the way for Brazil this year with wins at the Ekaterinburg Grand Slam and Cancun Grand Prix along with silver at the World Championships and bronze at the Tokyo Grand Slam. MOURA, 30, who was left out Brazil’s team for the Rio 2016 Olympics, took fifth at the previous Masters in Russia in 2013 and looks poised to force his way onto the medal podium in 2017. European champion Guram TUSHISHVILI (GEO) is back on IJF duty after losing out to Teddy RINER (FRA) at the World Championships and Openweight World Championships in successive events.

The 22-year-old still only has one IJF World Judo Tour victory to his name, the Baku Grand Slam in March, and will be desperate to conclude his breakout year with a magical heavyweight display. Openweight World Championships bronze medallist Alex GARCIA MENDOZA (CUB) and The Hague Grand Prix winner Roy MEYER (NED) will also be in contention.