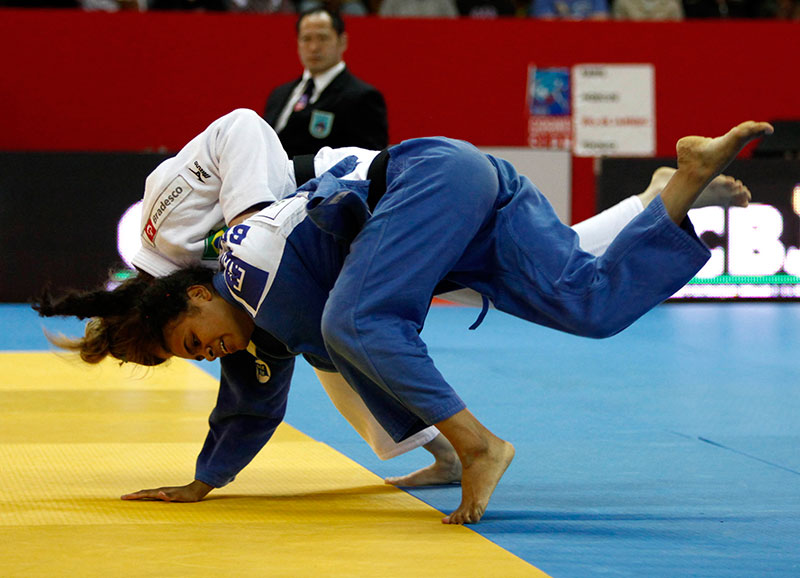 After only 20 second in the final, Paula PARETO (ARG) scored a first waza-ari, with a low sode-tsuri-komi-goshi, executed at the floor level. The fight then entered in a more tactical phase, the Argentinian trying to keep the score and the Brazilian trying to come back. When the final gong rang, the scoreboard was still showing one waza-ari to nothing. Paula PARETO won the first title to the 2012 edition of the Judo Grand Slam in Rio.

Top seeded athlete, Paula PARETO, from Argentina, reached the first semi-final of the day by winning against Nathalia BRIGIDA (BRA). To enter the final, she was opposed to an other Brazilian, Catiere TOLEDO, who earlier during the preliminaries won against the Chinese, MA Duan. During the five minutes of the combat, both competitors could not score and only two penalties were given to TOLEDO, enough for PARETO to win by yuko. Catiere TOLEDO finished at the third place.

The second semi-final of the day, opposed two Brazilian fighters, Gabriela CHIBANA and Agueda SILVA. After two minutes, CHIBANA scored a first waza-ari on the edge of the competition area. She then controlled the score until the very last second, when her opponent launched a last desperate attack, that CHIBANA counter attacked for a well deserved ippon and a place in the final. 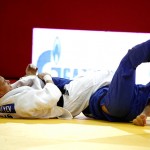 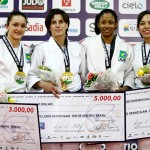 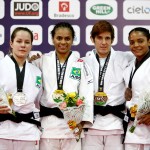 Amiran PAPINASHVILI (GEO) was awaited in the final of the men’s -60kg, but it was the other Georgian fighter, who was present on the tatami for the last fight of the category. Just before the first minute, SHUKVANI (GEO) scored a first yuko. Following a high rhythm, the two right handed judoka, kept trying finding the opening in their opponent’s defense, but with no success until the last 52 seconds, when the Georgian swept away (de-ashi-barai) the foot of SANTOS… for ippon ? No, the action was clearly outside and Betkili SHUKVANI had to wait the final gong to go to shake Peter Seisenbacher’s hand, the coach of the Georgian team.

World number 8, Amiran PAPINASHVILI, from Georgia, who is qualified for the London Games, entered the first semi-final after his win by ippon against Daniel MORAES (BRA), in quarter final. During the combat, despite a very tight fight, the Georgian seemed to dominate his opponent. But in front of an incredible public, SANTOS found the necessary energy to throw PAPINASHVILI for a waza-ari, only a few seconds before the end of the semi-final. Suddenly, the public exploded with joy and cheered SANTOS for his great performance. With the Brazilian entering the final, Amiran PAPINASHVILI took the bronze.

Again in the second half of the draw, an athlete from Georgia, Betkili SHUKVANI, and from Brazil, Breno ALVES, qualified for a ticket to the final, but this time the scenario was different, as Betkili SHUKVANI scored ippon with a low uchi-mata, starting inside and finishing outside the competition area, just before the beginning of the last minute. Breno ALVES took the bronze.

Just after the first minute, VALEMTIM Eleudis (BRA) was penalized with a first shido because, she was avoiding the griping of her opponent in the final, MENDES Milena (BRA). One minute later, it was the turn of MENDES to be penalized for passivity, but with no consequences on the scoreboard. The situation changed, when MENDES was again penalized with a shido, which gave a yuko to VALEMTIM. A last strong attack from MENDES was not enough to reverse the score and VALEMTIM could celebrate her victory of today’s competition.

The top seeded athlete, Ilse HEYLEN, from Belgium, had no major difficulties to enter the final block of the women’s -52kg category, where she was opposed to the local fighter, Milena MENDES (BRA). After 1:45, MENDES scored waza-ari, pushing HEYLEN to her limit to come back. A few seconds later, the Brazilian scored again, but after discussion, the referees cancelled this score. Nevertheless, it was written that this semi-final would finish before the final gong. Both athletes launched a simultaneous attack, which, for MENDES, begun with a ko-uchi-gari and ended with uchi-mata for ippon and a place in the final. The brazilian crowd, once again exploded with joy.

The second semi-final opposed Eleudis VALEMTIM (BRA) and Maria GARCIA (DOM). The regular time did not give a chance to the two semi-finalists to score. Only one penalty was given to Maria GARCIA for passivity. The golden score started with the same false rhythm but 1 minute 25 before the end of the fight, GARCIA was penalized, again for passivity, giving the victory to VALEMTIM. GARCIA took the bronze.

Just before the first minute, the Argentinian, Fernando GONZALES, was penalized with a shido for passivity. Then, the fight entered in a more dynamic phase with LAVRENTIEV trying to throw his opponent with a hip technic, while GONZALEZ was trying to counter attack him. But actually, the final suddenly ended with a precise and quick armlock, executed by LAVRENTIEV.

With no surprise, number one seeded, Lasha SHAVDATUASHVILI (GEO) was present among the four athletes qualified for the final block. In his semi-final, he fought against the Russian, Denis LAVRENTIEV, who after 1:44 scored ippon with a o-uchi-gari that pushed the two athletes outside the competition area. But as the action largely begun inside, the score was considered as valid. In the second half the draw, the Argentinian, Fernando GONZALEZ, and the Brazilian, Danilo FERRANTE, went through the preliminaries. Exactly at the same moment as during the first semi-final, GONZALEZ counter attacked FERRANTE, with a tremendous ura-nage, for ippon. FERRANTE took the bronze.

The first three minutes of the final between Jovana ROGIC (SRB) and Flavia RODRIGUES GOMES (BRA), passed by without any strong attack from both sides. Just before the last two minutes, ROGIC finally found a first tiny opportunity to score a yuko and to take the lead, which she kept until the end of the combat. After her bronze medal obtained two weeks ago in Moscow, the Serbian could celebrate her title.

Once again, the top seeded athlete of the day, Jovana ROGIC (SRB), in the women’s -57kg, entered the final block of the competition, by defeating Alexia CASTILHOS (BRA). With no difficulties she eliminated the Brazilian, Juliene ARYECHA, to enter the final. ARYECHA finished bronze medallist.

In the second half of the draw, the two brazilians, Camila MINAKAWA and Flavia RODRIGUES GOMES qualified themselves without any problem for the semi. The combat was tight until the very last moments, when RODRIGUES GOMES launched an incredibly aerial uchi-mata, for ippon.

The last men’s final of the day opposed two Brazilian athletes, Marcelo CONTINI and Adriano SANTOS, who know one-another very well. After the half of the fight, one shido to each was distributed and nothing seemed to be able to change the situation, until SANTOS received a second shido, synonymous of yuko for his opponent, but beyond that, synonymous of a first victory for the young athlete on the occasion of a major IJF World Judo Tour event.

The first semi-final of the day, opposed World number 194, Alexis MORIN-MARTEL (CAN), who earlier during the day eliminated Nicholas DELPOPOLO, ranked 14th and qualified for the Games, against Marcelo CONTINI, from Brazil. 2:15 after the beginning of the semifinal, CONTINI engaged a uchi-mata in circle for ippon and a place in the final of today’s category. MORIN-MARTEL finished on the third step of the podium.

The second semi-final opposed two Brazilian fighters Adriano SANTOS and Alex William POMBO DA SILVA. Before the half of the regular time, POMBO DA SILVA was disqualified because of a forbidden leg grab. He finished bronze medallist, while SANTOS was entering into the final.

The last final of the day opposed the two Brazilian, Mariana BARROS and Katherine CAMPOS. After 50 seconds a first shido was given to CAMPOS, for not respecting the limits of the competition area. At the half of the combat, a shido for passivity was also given to BARROS, but it sounded like a wake-up call for her. A few seconds later, she scored a ippon with a perfectly executed counter attack after the drop seoi-nage of CAMPOS.

The Women’s -63kg was dominated by the Brazilian squad as the four fighters from the Brazilian Judo Confederation, were qualified for the final block: Mariana BARROS against Dione BARBOSA DE LIMA and Katherine CAMPOS against Manoella COSTA. In the first semi-final, Mariana BARROS scored yuko with a shoulder movement (Morote-seoi-nage), enough for her the enter the final. Dione BARBOSA DE LIMA (BRA) took the bronze.

In the second semi-final, it looked like it would be again only a small yuko scored by CAMPOS, which would give the ticket to the final. But a few seconds before the end, the young fighter scored again, this time a waza-ari. COSTA, Manoella (BRA) took the bronze.