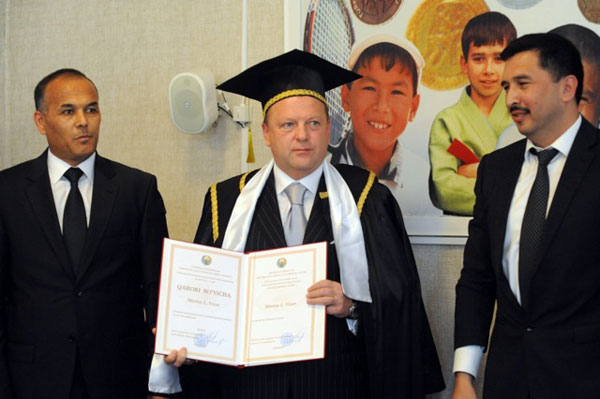 Good Care, The city of Tashkent, the Uzbek capital, hosted from April 27th to 29th, 2012, the Asian Judo Championships for the second time after the 2005 edition.

On the sidelines of the competition, Marius L. Vizer, the IJF president, was honored by the Uzbek government. “It is an honor to receive a President of an international federation of that size, which has done so much for the development of judo throughout the world since his election as the IJF President, back in 2007. Indeed, everything has changed since his arrival and Mr. Vizer made his federation one of the most powerful in the world”, stressed the Vice Minister of Sport, Djasur Anvarovich Akramov. “I do know that Mr. Vizer is attentive to the evolution of judo in our country and especially to the projects developed by our national Judo Federation and its President Armen Bagdasarov, with whom he works hand in hand.”

On the occasion of a formal ceremony held at the Institute of Sport and Physical Education in Tashkent, Marius L. Vizer was presented with the insignia of Honorary Professor of the Institute of Culture and Sport of the Republic of Uzbekistan. “I have great respect for your country. Throughout the process of social, economical and political transition that Uzbekistan witnessed, the Uzbek government has always shown a great respect for the sport in general and especially for judo”, said the IJF president in front of an attentive assembly, before adding: “Judo has values, you recognize it and I’m happy for that. We have known one another for a long time with Armen. When he was an athlete and became vice Olympic champion in Atlanta in 1996, I was the coach of one of his opponents. He is now the leader of the Uzbek federation. Your judo currently has the best athlete in the world (Rishod Sobirov) and the best coach in the world (Andrei Shturbabin). You are a great country in judo. Thank you for taking so good care of our sport”, concluded the IJF President. Text and pictures: Olivier Remy and Emmanuel Charlot L’Esprit du Judo