Lausanne, Jan 19, 2019: The atmosphere was studious this afternoon during the draw of the Tunis Grand Prix 2018. All the heads of delegations had eyes only for the big screen which posted one after another the results of this crucial and expected moment. Actually, the draw determines a large part of the strategy for the coming days.

When will my athletes start the competition? Against whom will be the first match? What are the chances of advancing in the draw to reach the places that give a significant amount of points for the world ranking? These are some of the questions that everyone had in mind during the half hour of the draw.

In front of a field of 46 delegations for a total of 335 athletes (197 men and 138 women), the judo world was gathered for the first time this season. After eight years of absence, the world circuit makes indeed its return to the Tunisian capital, which was underlined by the President of the Tunisian Judo Federation, Skander Hachicha:

“We are delighted with the confidence granted by the International Judo Federation. It is a great honor for all the Tunisian people to launch the international season in our country.”

A few minutes before, it was Mohamed Meridja, IJF Education and Coaching Director, who had opened the draw and welcomed the delegations by highlighting the great pleasure that the International Federation had to return to Tunisia, Africa, after a long absence.

In addition to the draw itself, which attracted all the attention of the assembly and which we invite you to discover by clicking HERE, Daniel Lascau, IJF Sport Director, made a complete presentation of the adaptation of the refereeing rules that will be in force in the months and years to come while the Olympic qualifying season is about to open in a few months.

Find all the information on these adapted rules HERE.

The Tunis Grand Prix will start tomorrow at 8:30 am. It should be noted that the participation is particularly high at the very beginning of the season, while many events are still to come. The first victories will be ferociously defended and in most categories it is difficult to draw an exhaustive list of favorites. Nevertheless, we invite you to discover the best medal chances below.

A few hours before the launch of the 2018 season, this Tunis Grand Prix has also been used to visit a number of judo clubs in Tunis and its region. Following the preview of the competition, you will discover what is the strength of Tunisia at the moment.

The athletes who participate tomorrow in the Grand Prix are probably already in bed, while they went through the weigh-in procedure a little earlier in the evening. It’s time now to gain strength. The die is cast. Serious things have started and everything is ready for a big show. In the three upcoming days, the shores of the Mediterranean Sea will vibrate under the ippons.

PREVIEW WOMEN
-48kg: In the women’s lightest weight category, where the first IJF gold medallist in 2018 will be crowned on Friday evening, there is a talent-rich field. JEONG Bokyeong (KOR) was one of the stars of the last Olympic cycle and came away with her country’s joint-best result as she took a silver medal. The South Korean won the Paris Grand Slam in 2017 and won bronze medals at the Tokyo Grand Slam and season-ending World Judo Masters.

Teenage sensation Daria BILODID (UKR) is already the senior European champion and won The Hague Grand Prix last year. The 17-year-old is a talent earmarked for greatness and is one of the most talked about judoka when the subject of Tokyo 2020 comes up.

-52kg: Kosovo’s number two Distria KRASNIQI (KOS) is her country’s lone representative at -52kg as Olympic champion and former world champion Majlinda KELMENDI (KOS) remains on the comeback trail following surgery at the end of 2017. KRASNIQI won the u23 European Championships and The Hague Grand Prix last year and the 22-year-old looks set to remain at this weight despite there being no Olympic opportunity as a country can only select one judoka per weight category.

Pan American champion Jessica PEREIRA (BRA) graced an IJF medal podium for the first time in 2017 with a bronze medal at the Zagreb Grand Prix and finished fifth at the World Judo Masters. French youngster Astride GNETO (FRA) will be bidding for her second IJF World Judo Tour medal having won the Abu Dhabi Grand Slam in 2016.

-57kg: Paris Grand Slam winner KWON Youjeong (KOR) was her country’s greatest discovery in 2017 and one of their top performers as she now starts a new season at the lofty heights of fifth place in the world. The 22-year-old won the Paris Grand Slam at her first attempt in February and then took silver at the Asian Championships, seventh-place at the Worlds and bronze at the World Judo Masters. KWON looks set to eclipse Rio 2016 pick and two-time Masters medallist KIM Jan-Di who only fought once last year and is again absent from an IJF event this weekend.

Nora GJAKOVA (KOS) won two Grand Prix titles in 2017 and bronze at the European Championships as Kosovo’s women continue to thrive under the tutelage of Driton Toni Kuka. GJAKOVA won in The Hague and Antalya and will be tipped for a medal in Tunis along with Ekaterinburg Grand Slam winner Miryam ROPER (PAN) who is enjoying a renaissance in the colours of Panama.

-63kg: Olympic champion Tina TRSTENJAK (SLO) is launching her 2018 campaign and quest to recapture her world title this year by competing at the first event of the season. European champion and Paris Grand Slam winner TRSTENJAK lost her world crown to arch-rival Clarisse AGBEGNENOU and has one aim this year of beating the Frenchwoman at the Baku 2018 Worlds to retake her throne at -63kg.

-70kg: The Hague Grand Prix winner Kim POLLING (NED) has a lot of work to do in this Olympic cycle is she is to don her judogi in Tokyo in 2020 with a string of young and hungry national rivals breathing down her neck.

-78kg: World number nine Karen STEVENSON (NED) is the number one seed in the women’s -78kg category. STEVENSON captured a brace of Grand Prix medals last year with silver in Hohhot and bronze in Cancun and ended her year on a high by winning bronze at the invite-only World Judo Masters.

Anastasiya TURCHYN (UKR) won on the Grand Prix stage twice in 2017 with victories in Tashkent and Tbilisi and the rangy world number 14 can trouble anyone with her uchi-mata. Junior European champion Klara APOTEKAR Klara (SLO) will also aim to be in medal contention as Slovenia unleash their top judoka at the season opener in Africa.

Ekaterinburg Grand Slam bronze medallist SLUTSKAYA has Rio 2016 Olympic bronze medallist Anamari VELENSEK (SLO) for company in the women’s heavyweight category as the Slovenian is stepping onto the mat at +78kg for only the third time having won in Tashkent and scooped bronze in Cancun since moving up from -78kg after the Games. Openweight Worlds bronze medallist and home hero Nihel CHEIKH ROUHOU Nihel (TUN) will be one of her country’s top medal hopes and will take to the tatami on Sunday. 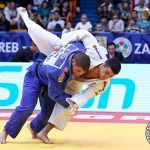 PREVIEW MEN
-60kg: The Hague Grand Prix winner Bekir OZLU (TUR) has a habit of producing spectacular moments at a competition without finding a route to the podium.

OZLU is a six-time Grand Prix medallist and medalled at his last two Grand Prix outings in 2017 with bronze in Zagreb and gold in the Netherlands. Antalya Grand Prix winner Gusman KYRGYZBAYEV (KAZ) is down the pecking order domestically but usually grasps his international opportunities while Oceania Championships winner Joshua KATZ (AUS) hopes that this will be the year when he wins IJF World Judo Tour honours.

-66kg: Junior world champion and Junior Pan American Championships winner Daniel CARGNIN (BRA) is the top seed at an IJF event for the first time in his fledgling career. The 20-year-old, who has already competed at the Paris and Tokyo Grand Slam events, is ranked 18th in the world and has the platform of a seeded position to target his first senior IJF medal.

-73kg: Tashkent Grand Prix winner Zhansay SMAGULOV (KAZ) is the top seed at an IJF event for the first time in his career. The tai-otoshi specialist is ranked 14th in the world and has the skills to compete on any stage with any opponent.

-81kg: World bronze medallist Saeid MOLLAEI (IRI) had a breakthrough year in 2017 and the world number three is looking for more of the same in 2018. MOLLAEI, 26, starts as the top seed in Tunis and will be spared from an early duel with fellow standouts present in the category on Saturday such as The Hague Grand Prix winner Ivan VOROBEV (RUS). Antalya Grand Prix winner Stanislav SEMENOV (RUS) will need to justify his inclusion by Ezio GAMBA.

-90kg: Former world silver medallist and Zagreb Grand Prix winner TOTH Krisztian (HUN) will be the man to watch in the -90kg category. The world number five finished fifth at the World Judo Masters in December and jumps right back into action as he aims for a highly-successful road to Baku 2018 and Tokyo 2020.

Baku Grand Slam winner Islam BOZBAYEV (KAZ) has shown that he has the quality to win a major IJF event and now has the challenge of repeating that on a regular basis. Junior world silver medallist Robert FLORENTINO (DOM) is a young judoka with high hopes and the 20-year-old could make an impression in his third Grand Prix start.

-100kg: Tashkent Grand Prix winner Ramadan DARWISH (EGY) has medalled at every level on the IJF World Judo Tour and will be bidding for his fifth Grand Prix title when he dons his judogi on Sunday. The 29-year-old, who is ranked 13th in the world, has 11 Grand Prix medals among his collection and will be the favourite to capture gold on day three.

Hong Kong Asian Open winner Benjamin FLETCHER (IRL) has followed his sister Megan in switching allegiance from Great Britain to Ireland and British Judo’s Male Senior Player of the Year for 2017 will be guaranteed more competitions this year and more opportunities for honours and vital World Ranking List points.

+100kg: In the absence of Teddy Riner (FRA – Rio Olympic Champion in +100kg) and Lukas KRPALEK (CZE – Rio 2016 Olympic champion in -100kg) the favorite of the tournament will be former world bronze medallist Faicel JABALLAH (TUN), who is one of the most experienced judoka in the competition and could be lifted by home advantage.

These are our bets, but there are 344 athletes from 46 delegations competing in Tunis and in this sport, in the end, nothing is for granted.