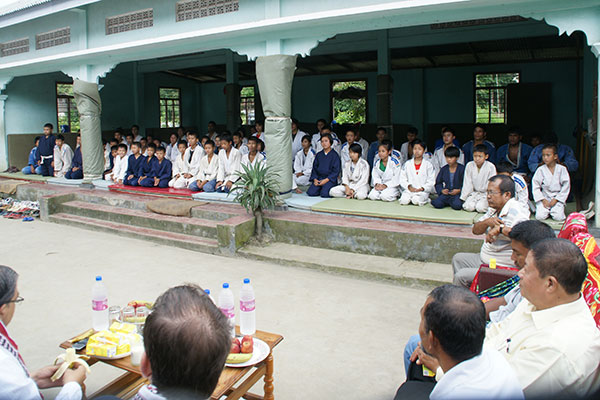 India, July 10, 2012: Police commissions, Recently the Director of the IJF Judo for Peace commission, Jan Eirik Schiotz, went to India with, Johannes Daxbacher, from the IJF Police and Army Commission to evaluate the possibility to develop joined projects.

Then Mr. Shiotz went to Bangladesh to follow up with some previous discussions and discover on the field to possibilities to set up JFP programs. The Judo for Peace Commission (JFP) has been active in India over the last two years. The Military and Police Commission is now joining the JFP efforts to support social projects in the region. The first proof of this joint efforts was demonstrated in the State of Manipur, India, at the end of June and beginning of July, 2012. 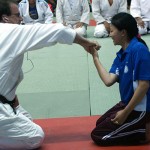 After the Judo for Peace event in Jaipur, India, organized in February 2010, the India Judo federation and IJF Judo for Peace (JFP) Commission evaluated the possibility to establish projects in the country. The secretary general of the India Judo Federation, Mukesh Kumar, proposed to evaluate the situation in the State of Manipur to see if the situation could fulfil the requirements for a JFP project.

Since 1964, there has been a separatist movement in Manipur with the establishment of a United National Liberation Front and several violent groups, which wanted Manipur to become sovereign. The situation has improved and programs focusing on social improvement can now be set up. Female judoka have achieved the best judo result in India and most of them are employed in the police forces. But despite that situation there is a need of improving the female condition. The possibility to combine the efforts of the two IJF commissions (Judo for Peace and Police and Army Commission) is very accurate. 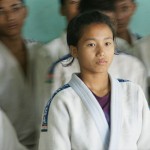 Program of the visit

The secretary general of the Indian Judo Federation, Mukesh Kumar, participated in all meeting and program in Manipur. During the visit, several meetings with the board of the Manipur Judo Association, the Minister of work and transportation, the General Secretary of the Manipur State Olympic Committee and the General Police Director for the State of Manipur were held. During the meeting with the General Police director, Mr. Daxbacher presented the philosophy of the M&P commission and discussed in a very positive way the possibility to set up closer relationships with the police forces and the Manipur Judo Association. This is a very good start, taken into the consideration that this year, at the Olympic Games, the judo representative from India is employed by the Imphal Police Forces. But also, that the best ever India Judo player is a female police officer from Imphal.

Beside the umerous meetings, several judo clubs were visited. During those visits training sessions were conducted by Mr. Daxbacher with great success and more than 300 young judo players were involved.

The last part of the program was dedicated to a seminar based on the Judo for Peace values, lead by Jan Eirik Schiotz. The main message was that the judo values and philosophy must be integrated as a natural element of the daily training. The massage was very well received.

A 3 years program shall be developed. The partners of the IJF would be the Manipur Judo Association, the Judo federation of India and the State of Manipur. New judo venues, in the neighbourhood of Imphal, should be built in a short period of time and scholarships for judoka will be funded.

The aims for that program would be

• Knowledge and experiences to be transferred to all Indian states

• Cooperation with the Police forces

After a strong evaluation of the political situation in the South Asian countries, the decision was taken that the Bangladesh Judo federation shall host the 3rd South Asia Judo for Peace summit. In addition Mr. Shiotz could evaluate the possibility to establish JFP activities in Bangladesh. The need of social and reconciliation projects is obvious and well documented. The potential for establish judo clubs and JFP program is huge. —– IJF