London, Sept 29, 2017: The International Mixed Martial Arts Federation is aware that the British Columbia Athletics Commission has permitted MMA athlete Jamie Herrington to compete professionally in Canada, despite the fact that she is currently suspended from competition by IMMAF until July 2019. 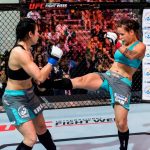 On 3rd September 2015, Ms Herrington was banned for 4 years from competition following a doping violation at the 2015 IMMAF World Championships in Las Vegas (USA).

Ms Herrington had participated in a series of matches in the tournament and subsequently won the gold medal in her division. She was notified of, and submitted to, a no notice post-bout competition test collected by Drug Free Sport Inc., a recognised and certified testing agency based in the USA.

The sample was submitted to the World Anti-Doping Agency Laboratory in Los Angeles, (UCLA), for analysis in accordance with the WADA International Standard for Laboratories and the WADA Prohibited List.

The ‘A’ sample analysis showed a positive result for amphetamine, a prohibited substance under S6 of the World Anti-Doping Agency Code, and therefore a breach of IMMAF’s WADA compliant Anti-Doping Rules.

In response, Herrington indicated she had taken Nyquil Night Time. She also attached websites supporting an argument of pseudoephedrine (an ingredient of Nyquil) creating false positives for amphetamine.

This was not accepted by IMMAF, based on the specific assertion by the laboratory that, given the highly selective GCMS method to detect amphetamine, pseudoephedrine would not be mistaken for amphetamine.

At Ms. Herrington’s request, her ‘B’ sample was also analysed, but likewise presented a positive result for amphetamine.

In reaching a decision on consequences to be imposed, the independent tribunal considered the Athlete’s explanation as to how the substance came to be present in her system, whether there was evidence of intention and the Athlete’s degree of fault in relation to this violation.

IMMAF stands by its decision based on the following facts;

· Pseudoephedrine (contained in Nyquil) is also a prohibited substance in competition.

· This over the counter medication was not declared at the time of testing nor in the pre/post match medical as required by the rules.

· The substance detected in Ms Herrington’s sample is amphetamine and not pseudoephedrine.

· The WADA accredited laboratory confirmed that there is no confusion in their (and WADA’s ) standard of analysis/detection with respect to amphetamine and pseudoephedrine.

See the full IMMAF Anti-doping decision in the case of Ms. Herrington HERE