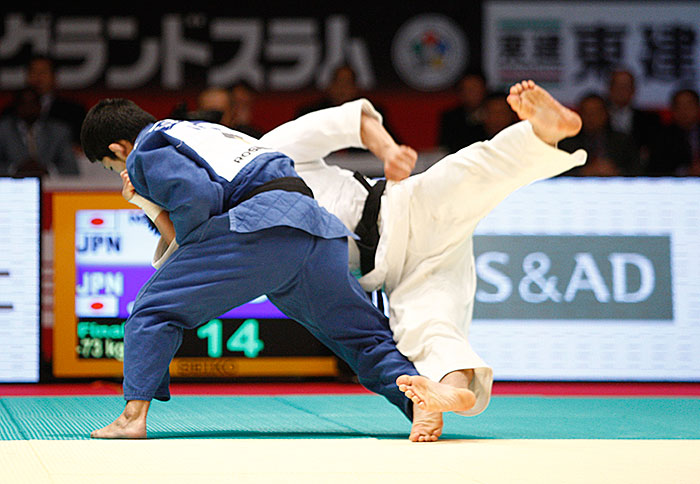 The final started with a long battle for the grip. TSUGANE being right handed and ABE left handed, both champions were looking for the opposite arm of the opponent to be able to engage a technic. TSUGANE was the only one to find the solution with a combination of Morote-seoi-nage (shoulder movement) and a small ko-uchi-gari for yuko.

The first semi-final of the day, opposed two athletes who did not occupy a seeded position during the draw: Rafaela SILVA (BRA) and Megumi TSUGANE (JPN). The Brazilian eliminated the number one seeded, JOUNG Da-Woon, before defeating KATAGIRI Natsumi, from Japan. To qualify for the semifinal, TSUGANE won against Hilde DREXLER (AUT), Catherine BEAUCHEMIN-PINARD (CAN) and Martyna TRAJDOS (GER). In the semifinal, despite a very strong attack from SILVA at the end of the fight, it was not enough to open the score and both athletes entered into the golden score. The rhythm of the match, dramatically increased as Silva and Tsugane tried to take the advantage. The first one to find an opportunity was the Japanese, who actually was definitely more dangerous with all her attacks since the starting of the golden score. With a beautiful waza-ari obtained with an acrobatic uchi-mata, she gained her ticket to the final. In the second half of the draw, Yarden GERBI was awaited but lost against ABE Kana (JPN). The second favorite was Clarisse AGBEGNENOU (FRA), who recently easily won the French National Championship, but she was surprised by the Cuban Maricet ESPINOSA, who won by ippon. In the semi-final, ABE easily found the solution to immobilize ESPINOSA and qualified for the final.

The second 100% Japanese final of the day was between NAKAYA Riki (JPN) and ONO Shohei (JPN). After one minute, NAKAYA received a first penalty for passivity, and he was then thrown for waza-ari after an o-soto-gari/o-soto-gari situation, quickly followed by tane-otoshi. Looking much fresher than NAKAYA, a few seconds later, ONO engaged once again a strong o-soto-gari, this time for ippon, giving no chance to NAKAYA.

With no surprise, the world number 2 of the category, NAKAYA Riki (JPN), qualified for the final block, where he was opposed to his teammate NISHIYAMA Yuki, giving a new chance to Japan to add more medals to the already long prize list of the host country. NAKAYA scored waza-ari, and was able to keep it until the end of the semifinal. If today, the world champion from 2009 (Rotterdam) and bronze medalist from the Athens Olympic Games, KHASHBAATAR Tsagaanbaatar (MGL), is only ranked 52 in the world ranking list, he still has great judo to show. After a complicated first fight against the Korean CHUNG Chul Min, he then qualified for the final block by winning only by ippon. In the semifinal, he was opposed to the world number 28, ONO Shohei (JPN). After a little bit more that one minute, ONO launched a strong uchi-mata, which was counterattacked by KHASHBAATAR, but the Japanese immediately followed with a precise sutemi-waza (sumi-gaeshi) for waza-ari. Under pressure KHASHBAATAR tried also to score with a left handed uchi-mata, which was countered by ONO for a second waz-ari.

Women’s -70kg: And the Eighth Title of the Weekend Goes to… The Netherlands!

The strongest attack of the first five minutes of the final came from the Dutch side with a opportunistic counterattack (ura-nage) from BOLDER, but this was not precise enough to score. The two finalists then entered into the Golden Score. Less active than the Japanese, BOLER was penalized with a shido, but the attack that she then launched on the edge of the tatami for yuko, offered her the first victory for an other country than Japan on the occasion of the 2012 edition of the Tokyo Judo Grand Slam.

World Number three and top seeded athlete of the category, PORTELA Maria (BRA) was stopped in the first round by IMAI Yuko (JPN) who then defeated KIM Seongyeon (KOR). In the semifinal, she was opposed to Linda BOLDER (NED), the winner of the World Cup in Rome, last September and new Dutch national Champion. For the first time of the day, a non-Japanese athlete was able to enter the final, as Linda Bolder defeated IMAI by ippon. The second semifinal opposed TACHIMOTO Haruka (JPN) and HWANG Ye-Sul (KOR). The two competitors delivered a very intense fight, but it was not enough to score anything during the regular time. During the golden score, the number of attacks, mainly coming from the Japanese side, was impressive, but until the last minute, none of them could really put the Korean in danger. Nevertheless, she looked more and more tired and even a little bit injured. Just before the minute, she was finally penalized with a second shido (she received the first one during the regular time), thus giving the victory to TACHIMOTO.

After one minute and forty seconds, VOROBEV was penalized with a first shido for passivity. After a long sequence of attacks by the Korean but for no score, the Russian was again penalized with a second shido, giving a yuko to KIM and the lead of the fight. One minute before the conclusion of the last final of the day, KIM also received a shido. When the final gong echoed in the venue, KIM could celebrate a new victory on the occasion of a major international event and could consolidate his World Number One position.

In the last category of the day, the first semifinal opposed the two best judoka of the moment: the London Olympic Champion, KIM from Korea, and PENALBER (BRA), winner of the Qingdao Grand Prix, one week ago, and also gold medalist in Rio and in Abu Dhabi, this year. From the start of the semi-final, KIM immediately launched some very strong shoulder techniques and sutemi-waza, but PENALBER looked very stable and started also to increase the level and the rhythm of his judo. For the first time since a long moment, KIM did not look so confident. But attacking again and again, he pushed PENALBER to be penalized. Exactly 5 seconds before the end of the fight, KIM engaged an other powerful shoulder technique (morote-seoi-nage), which he followed by a ko-uchi-gari for waza-ari. In the second half of the draw, if Sirazhudin MAGOMEDOV was the best seeded competitor, it is an other Russian fighter who entered the final block, Ivan VOROBEV. In the semifinal, he was opposed to KAWAKAMI Tomohiro (JPN). After one and a half minute, VOROBEV being more active, KAWAKAMI was penalized with a first shido. Just before the last two minutes, while both fighters were at the limit of the fighting area, VOROBEV engaged uchi-mata for yuko, clearly taking the lead. Thirty seconds later, he counterattacked one of the Japanese attempts to come back and this time scored ippon. —- IJF