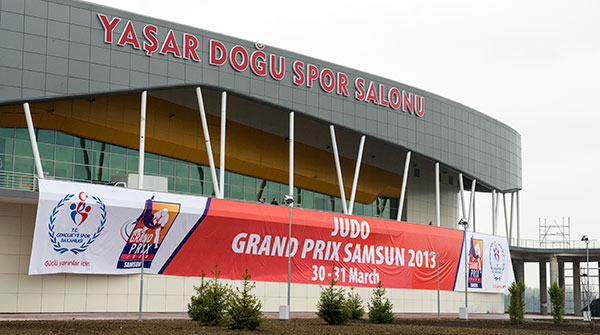 Mar 29, 2013: On Friday the draw took place at Hotel Buyuk Samsun before delegations of the 40 countries that are competing at the third World Judo Tour event of the year, following the season-opening Paris Grand Slam and the Dusseldorf Grand Prix. The two-day spectacle, which will be staged from 2013 through to 2016, will showcase 320 judoka from those 40 countries who have warmly welcomed the events addition to the international calendar ahead of their respective continental championships in April.

During his speech Fatih UYSAL, President Turkish Judo Federation, welcomed all delegations and officials to Samsun: “Dear IJF representatives and judo people, I welcome you to the Samsun Grand Prix in Turkey where we hope to see you here for all four years in this Olympic cycle. We’ve been making preparations for a long time with Turkish Judo Federation and Ministry of Sport. We wish you all a good competition in a very nice sports hall. We wish to work together with you to do a lot of judo in the sport. I wish you all a big success and welcome once again to Turkey.”

Vlad MARINESCU, Director of the IJF Presidential Office, spoke on behalf of Mr. Marius VIZER, IJF President and commended the efforts of the Turkey Judo Federation in hosting the event: “I would like to welcome you all here in the name of our President, Mr. Marius VIZER, who will be here with us on Saturday. We’re very happy to be here and we congratulate the Turkish Judo Federation for making this Grand Prix a reality. The event will be here four years and their work has been fantastic.”

Jan SNIJDERS, IJF Refereeing Director, was on hand to comment on the testing rules’ integration on the World Judo Tour thus far and reinforced one area of important for the delegations: “Every one of you has already experienced the new rules and for me one of the most crucial areas is kumikata. Fighters don’t like breaking grip, but the rule is very strict and you need good kumikata. My advice is if you break the grip then to take it again immediately. Judoka also know the rules with regards to gripping below the belt. We are moving in a good direction for the future. We are improving judo and, as we’ve said, we will review the testing rules after World Championships in Rio de Janeiro late this year.”

World number four and London 2012 Olympic bronze medallist Charline VAN SNICK (BEL) is the top seed and will be the judoka to beat in the 15-strong category which includes former European silver medallist Valentina Moscat (ITA).

World number two Majlinda KELMENDI (KOS) has starred on the World Judo Tour already this year with a silver medal at the Paris Grand Slam and gold at the Dusseldorf Grand Prix. Among those with a medal in their sights in the 19-strong category will also be London 2012 bronze medallist Priscilla GNETO (FRA) and two-time European bronze medallist Mareen KRAEH (GER).

Austrian veteran Sabrina FILZMOSER, winner of two world bronze medals, is the top seed in the 21-strong category. The event will also mark the return of reigning European bronze medallist Miryam ROPER (GER) who makes her comeback after a three-month injury lay-off having sustained a torn pectoral muscle in December at the post-Tokyo Grand Slam training camp.

World number three and London 2012 Olympic bronze medallist Gevrise EMANE (FRA) bids for glory in the 23-strong category while opposition will come from Alice SCHLESINGER and Yarden GERBI (both ISR), who are ranked eight and tenth respectively on the world ranking list.

Turkey’s reigning European bronze medallist Beliks Zehra KAYA (TUR) will stir a wave of patriotic hope as the capacity crowd roots for the top seed in the +78kg category which has attracted 11 judoka. Zehra KAYA will start her tournament against compatriot Fulya KUL (TUR) as both judoka receive a first round bye.

Amartuvshin DASHDAVAA (MGL) is the top seed in the -60kg category which will see 32 judoka compete on the tatami. The star-laden category also features the evergreen Ludwig PAISCHER (AUT), the Beijing silver medallist, who has shown he can still compete with the best in the sport.

Asia will be out to dominate the -66kg category as world number nine Mirzahid Farmonov (UZB) and world number 10 Miyaragchaa SANJAASUREN (MGL) will both have aspirations of topping the medal podium. Also looking to stand out in the 28-strong category will be former world and European champion Georgii ZANTARAIA (UKR) will also look to clinch the most significant medal to date in his new -66kg weight category after winning Warsaw European Open gold four weeks ago.

London 2012 Olympic bronze medallist Nyam-Ochir SAINJARGAL (MGL) occupies the top seed while the man who stood next to him on the medal podium as the second bronze medallist in London, Ugo LEGRAND will aim for -73kg gold. Also featuring in the 32-man field will be two-time Asian Championship bronze medallist Navruz JURAKOBILOV (UZB).

World number one Ramziddin SAYIDOV (UZB) will be the man to beat in the -100kg category while Lukas KRPALEK (CZE) will have his own ambition to steal the show having already shown his ability this year with gold at the Paris Grand Slam. Fellow standouts in the 26-man category include world number five and London 2012 Olympic bronze medallist Henk GROL (NED).

Eight-time African champion Islam EL SHEHABY (EGY) will aim to power his way to glory in the 22-man category. Warsaw European open winner Renat Saidov (RUS) has pedigree at this level as a former Grand Prix and Grand Slam medallist and could derail the hopes of teammate Magomed NAZHMUDINOV (RUS) in a potential pool final.