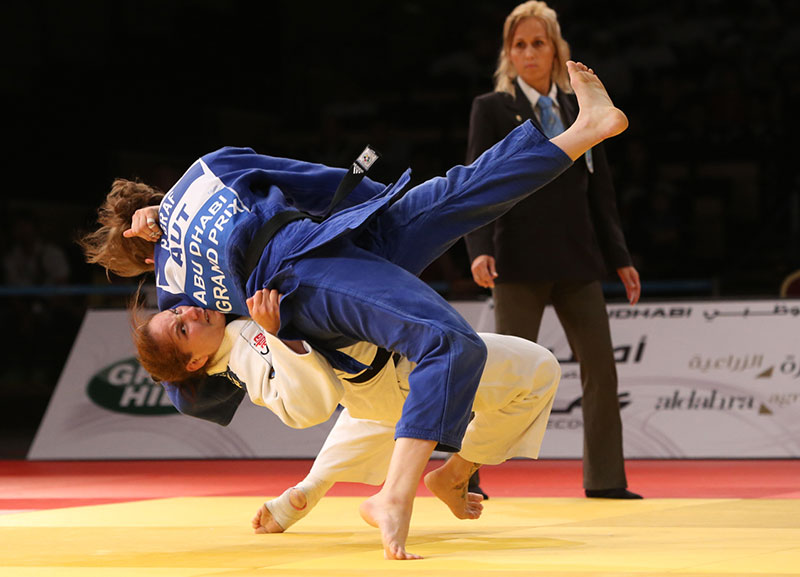 Abu Dhabi, Oct 12, 2012: In the presence of, Mr. Wilfried Lemke, UN Secretary-General’s Special Adviser on Sport for Development and Peace, who came to sign the cooperation agreement with the IJF President, Mr. Marius Vizer, (video of the signing ceremony:http://news.ijf.org/archive/news1/media/un_signing.mp4), today was the second day of competition at the Judo Grand Prix, Abu Dhabi 2012. 4 categories were concerned: the women’s -63 and -70 and the men’s -73 and -81kg.

The expected match-up between number one seed Clarisse Agbegnenou FRA and Brazil’s Rafaela Silva failed to materialize, as both made exists in their opening contests. Agbegnenou fell foul of the leg-grab rule in her contest with Katrin Unterwurzacher AUT whilst Silva was undone with a neat transition from tachi waza to ne waza by Sweden’s Anna Bernholm from which there was no escape. The Swede was defeated in her semi-final by Unterwurzacher who went on to defeat Di Cintio FRA in the final with a beautifully executed ko soto gake. There were well-deserved bronze medals for Baldorj Mungunchimeg MGL and Anna Bernholm SWE. Results

Fanny Estelle Posvite FRA managed to collect four penalties with more than half of her contest remaining against junior world champion Bernadette Graf AUT. In what must be for her a disappointing showing Posvite failed to come to terms with Graf’s combative style and at times appeared lost for ideas. Brazil’s Maria Portela proved too strong in the final for the emerging Austrian talent and Graf was thrown with ura nage for ippon. Results

Number four seed Murat Kodzokov RUS took the gold medal here defeating Hungary’s Ungvari Miklos in a dour final. Despite Kodzokov’s efforts to inject some degree of action into the contest Ungvari succeeded in making life difficult for the Russian with a variety of tactics that bordered on the negative. Ungvari had earlier shown a far more attractive and spectacular side to his judo in throwing Mongolia’s Odbayar Ganbatar for ippon in the semi-final with an expertly timed ko uchi makikomi for ippon. Results

Victor Penalber BRA may be considered to have caused somewhat of an upset when he defeated Sirazhudin Magomedov RUS in a hard fought final. The Russian had not really been pressed all day and looked to be fighting within himself even in the final. When called upon to step up the pace the Russian seemed unable to find his usual explosive techniques and had to settle for the silver medal. Results