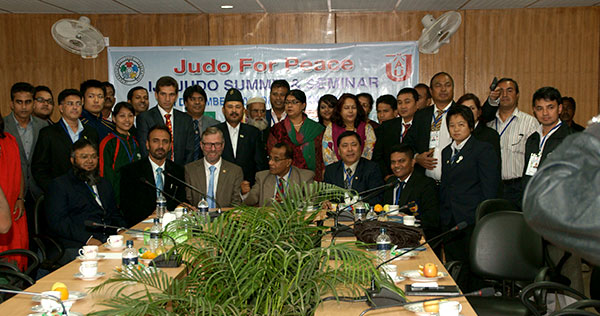 Dhaka – Bangladesh: Judo for Peace, The South Asia Judo federations presented their IJF Judo for Peace projects on the occasion of an important JFP Summit in Dhaka, Bangladesh one week ago. A lot of impressive efforts demonstrated that the values of Judo are promoted throughout the region.

For the third time, the South Asia Judo Federations where gathered together to discus and look ahead on how judo can make a contribution to peace, reconciliation and development of society, based on the judo values. Last year the Nepal Judo Federation organized a great event that included the summit, a seminar and a judo event for cadets. The Bangladesh Judo federation followed up last year success. The federations use judo as a valuable tool in post conflict regions and promote reconciliation efforts to develop a better society.

For many years, the Nepal Judo federation has been active in the Judo for Peace program. The country still suffers from the unsolved political conflicts. Today, the ongoing projects include Orphanages in conflict areas. In the future, approximately 40 orphanages can be included in the program, which may involve up to 10,000 charity children. Furthermore the program can also include primary school in conflict regions.

During the first phase, the Bangladesh Judo Federation will follow up the Judo for peace program by establishing a project that will cover activities in up to 20 orphanages. In the future the activity can cover up to 40 orphanages.

Both in Nepal and Bangladesh the Judo for Peace activities were reinforced by participating at the Judo for Peace seminar held in Drammen, Norway, last June. The participants increased their knowledge regarding judo as a tool in peace and reconciliation.

In Sri Lanka, the Government established a sport program in the Northern part of the country, where the civil war ended in 2009. The aim is to establish normal relationships between all ethnic groups. The Sri Lanka Judo federation will follow up the Governmental program so judo can be one of the selected sports.

In Afghanistan the political and security situation made things complicated to develop sport activities. Nevertheless, the federation has managed, with some foreign support and local financing, to build a national dojo. The dojo will be a centre for all kind of judo activities in the country and also for reconciliation projects. Even if the situation is very uncertain, the federation has been developing plans for both sports and reconciliation activities in all parts of the country.

A total number of 50 persons, coaches and executives, were present at the Judo for peace seminar. Judo values and Jigoro Kano’s statements on objectives for judo training were presented. The coach’s task to include judo values in daily training was emphasized.

On the occasion of the second day of the South Asia Judo Summit, a cadet tournament was held. A total of 100 participants from 3 countries were present. The Nepal Judo Federation selected their participants from different orphanages. The tournament was organized in a social and friendly atmosphere, to demonstrate that friendship can be established across boarder, with different cultures and ethnic backgrounds. At the end of the second day a farewell party was organized for the young participants with great success. The Bangladesh Judo federation has done a great job to prepare the South Asia Judo for peace Summit. —- IJF