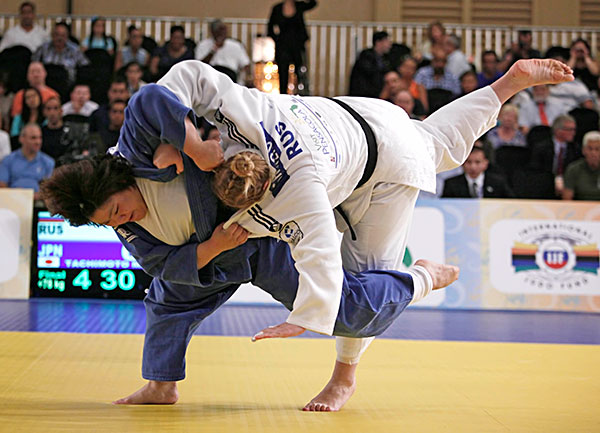 Miami – USA, June 16, 2013: Today (Sunday) was the second and final day of the first Miami Judo Grand Prix at the Doral Legends Ballroom.

The World Judo Tour looked at home at the world famous tourist resort as the American faithful savoured their first Grand Prix experience. Seven weight categories were in action as the women’s -70kg, -78kg, +78kg categories and men’s -81kg, -90kg, -100kg and +100kg categories all took to the tatami.

The successful first Miami Judo Grand Prix was made possible by USA Judo and a tireless team of volunteers including PJC hall of famer and 9th Dan Luis Guardia Hanshi.

The 80-year-old living legend, who told his story incredible story in his autobiography Origen del Judo Panamericano (The Origin of Pan-American Judo), volunteered his time to work in judogi control. “I have been working in judo in this continent for 63 years,” said the Cuban-American. I’m always ready to assist in any way I can at events and I’m very happy to be here to support this great Grand Prix. It is important for us to host events of this level and helps us prepare for the Cadet World Championships in August. Countries in the Pan American Judo Confederation are improving all the time in judo and it’s a pleasure to see their progress. The Pan American Judo Confederation is working to assist them and it’s important that countries and judoka can compete at events of the highest level on their home continent.”

Prague European Open bronze medallist Iljana MARZOK (GER) was in irresistible form today. The highly-regarded German saved her best until last as she defeated Pan American silver medallist Onix CORTES ALDAMA in the -70kg final. MARZOK attempted an ouchi-gari but kept her foot there and changed direction to break the resistance of CORTES ALDAMA for the maximum score of ippon.

The first bronze medal was won by reigning Tokyo Grand Slam silver medallist TACHIMOTO Haruka (JPN) who overpowered London 2012 Olympic bronze medallist Yuri ALVEAR (COL). TACHIMOTO opened the scoring by throwing ALVEAR with a harai-makikomi for a waza-ari. The Japanese judoka sealed a place on the medal podium by holding down her rival with a tate-shiho-gatame before adjusting to a mune-gatame to remain in control of ALVEAR with osaekomi-waza to score a waza-ari and win by waza-ari-awasette-ippon. The second bronze medal was won by former Caribbean champion Maria PEREZ (PUR) who threw former European u23 Championship bronze medallist Margarita GURTSIEVA (RUS) with a drop seoi-nage for ippon as the crowd roared their approval for their neighbour from Puerto Rico.

World champion Audrey TCHEUMEO (FRA) issued a warning to her -78kg rivals as the road to defending her world title gathers pace after a high-quality display in Miami. TCHEUMEO took the lead against world number 10 Luise MALZAHN (GER) with a yuko from a harai-goshi but the German levelled the score with an ouchi-gari. The in-form French star followed up on her World Judo Masters bronze medal by coming out on top this time around as she proved too strong for MALZAHN in ne-waza as she held down her rival with a mune-gatame for ippon.

World number three TACHIMOTO Megumi (JPN) won the top prize in the +78g category as she overwhelmed former Russian Championship silver medallist Mariia SHEKEROVA (RUS). The Japanese ace ensured a second medal for the TACHIMOTO household after her youngster sister Haruka won -70kg bronze earlier in the day. The oldest of the TACHIMOTO sisters was swift of thought and execution as she dived on SHEKEROVA to hold her down for waza-ari and a win by waza-ari-awasette-ippon.

The first bronze medal was won by world number seven Emilie ANDEOL (FRA) with a fine piece of opportunism against former Rio Grand Slam winner Vanessa ZAMBOTTI (MEX). With one second left ANDEOL countered a weak ashi-waza attack from ZAMBOTTI who left herself off balance and the French standout reacted to hook the Mexican for a match-winning yuko. The second bronze medal went to London 2012 Olympic champion Idalys ORTIZ (CUB) who prevailed in an absorbing contest against Baku Grand Slam bronze medallist Carolin WEISS (GER). ORTIZ was shocked in the semi-final against SHEKEROVA but recovered to redeem herself in the repechage. The even contest went into golden score and after two and a half minutes WEISS was penalised with a shido for passivity to hand victory to ORTIZ.

Buenos Aires Pan American Open bronze medallist Tom REED (GBR) fulfilled his ability on the World Judo Tour as he clinched his first Grand Prix medal in style against seven-time Pan American medallist Emmanuel LUCENTI (ARG). REED has long been on the verge of a breakthrough at this level and secured the biggest result of his career by firing over LUCENTI, who finished in seventh-place at London 2012, with a sumi-gaeshi for yuko which was enough for victory.

The first bronze medal was won by Mauro Henrique MOURA (BRA) who bested former Asian Youth Championship bronze medallist Altanbagana GANTULGA (MGL) with a sasae-tsurikomi-ashi for ippon. A joyous MOURA punched the air and embraced with his coach while 17-year-old GANTULGA can be proud of his efforts as the precocious youngster has established himself in the world-class Mongolian team. The second bronze medal was also captured by Mongolia as reigning Moscow Grand Slam bronze medallist Tuvshinjargal GAN (MGL) matched the efforts of his highly-touted teammate. GAN held down Pan American championship bronze medallist Jonathan FERNANDEZ (USA) with a mune-gatame for a second waza-ari to win by waza-ari-awasette-ippon.

World number two Asley GONZALEZ (CUB) starred for Cuba as he triumphed against former European silver medallist Grigorii SULEMIN (RUS) in the -90kg final. London 2012 Olympic silver medallist GONZALEZ, who won World Judo Masters bronze last time out, was the busier of the two judoka and sensed that victory was within his grasp. GONZALEZ was well supported by the vocal Cuban supporters and gave them a moment to savour as he threw SULEMIN with a tsurikomi-ashi for ippon.

The first bronze medal was won by US National Championship silver medallist Colton BROWN (USA) who saw off Buenos Aires Pan American bronze medallist Matthew PURSSEY (GBR). With both men targeting their first Grand Prix medal the contest was the most important of their respective careers. PURSSEY guided teammate Ashley MCKENZIE (GBR) to -60kg bronze on Saturday as his coach for the day but was unable to achieve the same feat as BROWN brought the home crowd to their feet by throwing the Briton with a ko-soto gake for ippon. The second bronze was clinched by Tallinn European Open winner Ciril GROSSKLAUS (SUI) who conquered former Rio Grand Slam bronze medallist Thomas BRICENO (CHI). GROSSKLAUS went ahead by countering BRICENO with ashi-waza for a waza-ari. The Swiss ace ensured a first appearance on a Grand Prix medal podium by catching BRICENO with a tai-otoshi for a second waza-ari.

Former European bronze medallist Zafar MAKHMADOV (RUS) won -100kg gold as he stopped former World Judo Masters bronze medallist Hugo PESSANHA (BRA) in the final. MAKHMADOV (RUS) manoeuvred his feet the quickest to reach for an osoto-gari for a waza-ari as time ran out on PESSANHA who stepped up his work rate with 30 seconds left but left it too late to rescue the contest.

The first bronze medal was won by former Brazilian u23 Championship silver medallist Rafael BUZACARINI (BRA) against Buenos Aires Pan American Open bronze medallist Hector CAMPOS (ARG). BUZACARINI found his rhythm and had CAMPOS on the back foot with repeated ashi-waza attacks. The Brazilian caught his fellow South American with a ko-uchi-gari for a yuko with one second left in the contest. The second bronze medal went to former Czech Championship bronze medallist Radek HECL (CZE) who fought off the challenge of Pan American bronze medallist Dilyaver SHEYKHISLYAMOV (CAN) to earn a career-best result. HECL pounced with some powerful ashi-wazi to floor SHEYKHISLYAMOV with an okuri-ashi-barai for ippon.

Former Asian champion KIM Soo-Whan (KOR) provided a stunning conclusion to the Miami Grand Prix as he elevated World Judo Masters bronze medallist Renat SAIDOV with an uchi-mata for a magnificent ippon. KIM was surprised at the space afforded to him by SAIDOV and the South Korean did not require a second invitation as he lifted up the Russian with ease to win the title in style.

The first bronze medal was won by world number nine Walter SANTOS (BRA) against world number 12 Oscar BRAYSON (CUB). With 13 seconds left and two shido penalties to his name SANTOS had no choice but to attack and swept BRAYSON with an okuri-ashi-barai for ippon to extend his advantage over the Cuban on the world ranking list. The second bronze medal was captured by former Mongolian national champion and world number 37 Sugarjargal BOLDPUREV (MGL) against Samsun Grand Prix winner Magomed NAZHMUDINOV (RUS). Both men exchanged shido penalties but NAZHMUDINOV failed to change his tactics and received a fourth shido to lose by hansoku-make and in the process ensured BOLDPUREV would surge up the rankings. —- Photos © IJF media by G. Sabau