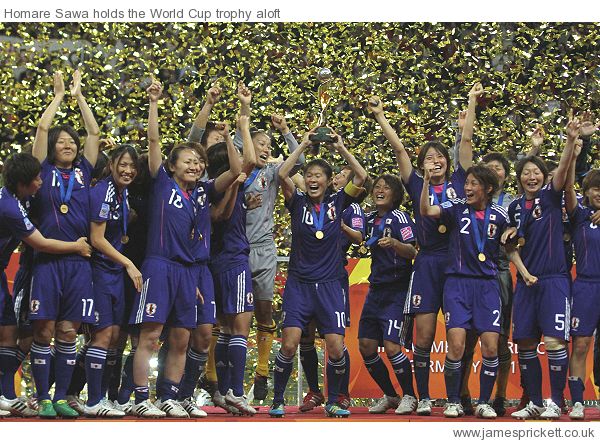 Consensus has been broad and wide-ranging. Germany 2011 was a veritable festival of football and its effects are still being felt far beyond the host nation’s frontiers. One year on from the Opening Match, played before a record-breaking packed house at Berlin’s Olympiastadion, enthusiasm for the women’s game has not died down.

In the case of Germany, another glimpse at the figures reveals the positive effects of last year’s big event. The DFB now boasts 734,903 registered women players, with 342,312 girls under the age of 16 playing the game at German clubs, an increase of ten and one per cent respectively on last year.

A similar upturn can be seen in the attendance figures for the women’s Bundesliga, which jumped 35 per cent in the 2011/12 season, with a league record crowd of 8,689 turning up for the match between VfL Wolfsburg and 1. FFC Frankfurt. The European season also ended on a high note with Lyon’s 2-0 defeat of Frankfurt in the final of the UEFA Women’s Champions League at Munich’s Olympiastadion, which attracted a record European club attendance of 50,000.

Other countries besides Germany are witnessing an upsurge in the women’s game, among them France, where average gates have climbed to 7,000 and all major games in the national women’s league are broadcast live on television.

Sweden’s Damallsvenskan is posting some healthy attendance figures itself, while the country’s football lovers were also out in force at last month’s Winners Cup, a tournament that saw reigning world champions Japan, Beijing 2008 gold medallists USA and hosts Sweden play to packed stadiums.

“The U-17 Women’s World Cup in Azerbaijan and the U-20 Women’s World Cup in Japan will give us the opportunity to support the development of women’s football at a global level,” said FIFA’s Head of Women’s Competitions Tatjana Haenni. “Our game is on the right track but we mustn’t lose sight of the fact that a lot of work still needs to be done in many areas.”

In preparation for its very first FIFA World Cup competition, Azerbaijan has built six shining new stadiums and has seen a large programme put in place to safeguard the long-term development of the women’s game there, a programme that involves the creation of training courses and seminars for referees and instructors.

The U-17 women’s world finals, which will be held between September 22 and October 13 in the cities of Baku and Lankaran, are a hugely important event for the local authorities and will attract international stars of the calibre of Jennifer Lopez, Rihanna and Shakira.

With the women’s game still in its infancy in Azerbaijan, the hosting of the tournament provides an opportunity for the country to create some solid structures. And however well the country’s U-17 side does, the main focus of attention will be the progress women’s football makes in Azerbaijan after the tournament is over.

Meanwhile, the FIFA U-20 Women’s World Cup, which will run from 19 August to 8 September and will be held in the cities of Hiroshima, Kobe, Miyagi, Saitama and Tokyo, is another of this year’s highlights. Following the Nadeshiko’s victory at Germany 2011 and their clean sweep at the FIFA Ballon d’Or Gala 2011, where Homare Sawa was named FIFA Women’s World Player of the Year, Norio Sasaki the FIFA World Coach of the Year for Women’s Football and where Japan also scooped the FIFA Fair Play Award, the nation has taken the women’s game to its hearts.

According to a recent study, interest in women’s football in Japan has risen nearly 20 per cent on last year, with a number of women’s Bundesliga being shown on Japanese TV. On top of that, the match between Albirex Niigata Ladies and INAC Kobe Leonessa was watched by an all-time high crowd of 24,546.

The fever is rising

“The enthusiasm for women’s football in Azerbaijan and Japan says much about the progress we have made in these last few years,” added Haenni. “FIFA is always looking to get new nations involved through its tournaments, a policy that can only be beneficial for FIFA and women’s football in general.”

One year on from Germany 2011, a total of 29 million women around the world now play the game. And according to a survey commissioned by FIFA, 70 per cent of people have a favourable opinion of women’s football, an indication of its growing importance.

With a view to guaranteeing the success of future women’s competitions and creating a synergy for promoting women’s football worldwide, FIFA unveiled the Live Your Goals campaign at the Opening Match of Germany 2011. The aim of the initiative is to harness the impact of major international competitions in highlighting the social impact of the sport, and to encourage women to take it up.

Thousands of young girls have already taken part in Live Your Goals festivals in Japan, Azerbaijan and Costa Rica, the host nation of the 2014 FIFA U-17 Women’s World Cup. It is initiatives such as these that are ensuring the continued spread of women’s football fever. —– FIFA/Image © womenssoccerscene.co.uk