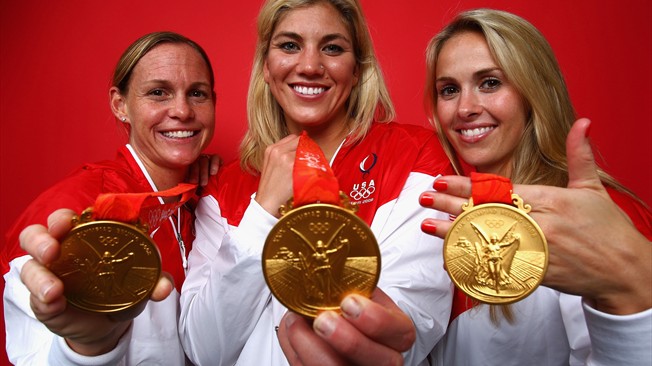 Zurich – Switzerland, July 23, 2012: Though the Women’s Olympic Football Tournament is a relatively new event in the history of the Games, it is this very discipline that has the honour of kicking off all the sporting action come London 2012. Getting the ball rolling at the 30th edition of the summer Olympics, in more ways than one, will be the clash between Great Britain and New Zealand at Cardiff’s Millennium Stadium on 25 July.

Two-hundred and sixteen players have made the cut for the 12 competing senior national teams, which are set to battle it out over the space of 19 days for the gold medals up for grabs in the final on Thursday 9 August at Wembley Stadium. Yet before we come to said big day in the English capital, there will be another 25 matches held across the six host cities: London, Cardiff, Coventry, Manchester, Newcastle and Glasgow.

Among those selected are a veritable galaxy of stars from the women’s global game, including FIFA Women’s World Player of the Year 2011, Japan’s Homare Sawa. Also joining her will be the two players who finished right behind Sawa in the running for that award, USA’s Abby Wambach and Marta of Brazil.

Adding a further dose of excitement is the clutch of genuine contenders for gold on British soil. While reigning world champions Japan are undoubtedly among that number, the statistics remain heavily in favour of holders USA, winners of three of the four Women’s Olympic Football Tournaments to date and silver medallists in the one that got away – against Norway at Sydney 2000.

Another ill omen for the Nadeshiko is that, to date, no national team have won the FIFA Women’s World Cup™ and then claimed Olympic gold the following year. Even so, the extraordinary progress made by Japan’s senior women’s side gives them every right to dream of improving on their best performance to date in the competition: fourth place at Beijing 2008.

Another weighty challenger would have been Germany, yet the nation that won bronze four years ago and were one of only five countries to appear in all four previous editions of the Women’s Olympic Football Tournament will not be involved in London. Of that group of five, China PR also miss out this time around, leaving Brazil, USA and Sweden as the only nations to have competed in every edition of the tournament since the inaugural event at Atlanta 1996.

On the flipside, Great Britain, Cameroon, Colombia, France and South Africa will be adding a sprinkle of freshness that only debutants can bring. The African contingent will be particularly confident of making a splash, having ousted continental giants Nigeria in qualifying, while Les Bleues earned admirers aplenty on their way to fourth place at Germany 2011.

The competition in Great Britain will surely throw up a number of new records for the discipline on the Olympic stage, with top spot in the all-time goalscorers’ standings just one of the landmarks under threat. Indeed, Germany’s Brigit Prinz and Cristiane of Brazil currently share first place with ten goals apiece, and the latter will shortly have the opportunity to add to that tally having been selected for the Canarinha squad once more.

The prolific pair are also the only two players to score hat-tricks at the Women’s Olympic Football Tournament, a feat Cristiane has achieved on two occasions, though who is to say another name might not be added to this exclusive list at London 2012?

Should Brazilian duo Formiga and Tania make an appearance at the Games they will become the only players to have taken part in every edition of the Olympic competition so far. Over and above that, however, the Auriverde squad will be desperate to finally clinch gold, having had to make do with silver at both Athens 2004 and Beijing 2008.

They will clearly not be the only ones whose dreams have a golden tinge to them over the coming days, as last-minute preparations gather pace ahead of the big kick-off. But what about you, the FIFA.com users? Have you caught Olympic football fever yet? If so, stick with us throughout the competition, as we will bring you everything you need to know about the Men’s and Women’s Olympic Football Tournaments as it happens. Welcome to London 2012! —- FIFA