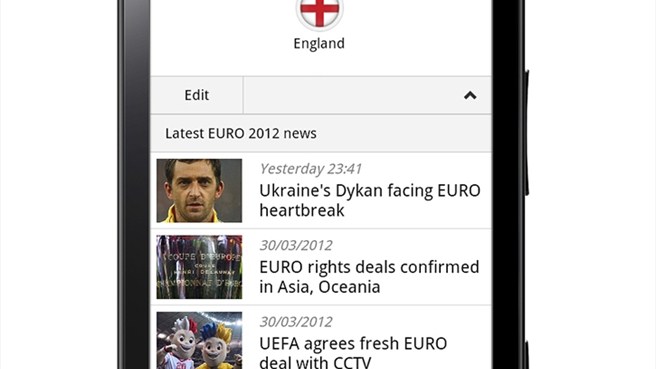 Switzerland, April 13, 2012: With less than two months to go before the start of the UEFA European Championship, UEFA and Orange have teamed up to unveil the Official UEFA EURO 2012 mobile app – the definitive source of information on Europe’s top national team football tournament.

Available on eight mobile platforms including iOS, Android, Windows Phone, Blackberry, Bada and Java, the free app provides up-to-date news on the teams and tournament, live text commentaries, video interviews, premium paid-for highlights, statistics and personalised push notifications allowing fans to get the latest news on their favourite teams. For the first time, from a EURO app, fans will be able to share tournament news and updates with friends and family via Facebook and Twitter.

“Our goal is to create digital experiences that connect our customers around their passions – and UEFA EURO 2012 is the football event that supporters will be most passionate about this year,” said Séverine Legrix de la Salle, vice-president of brand at Orange. “By adding social and geolocation functionality to a EURO app for the first time, we are helping football fans across Europe to get the most out of UEFA EURO 2012 whether at home or at the tournament.”

In addition to receiving all the latest news, the app will help fans prepare for the summer finals like never before, with features like the mobile fan kit, including “Photo Fun” which lets users digitally apply face paint to a photo and share it with friends, as well as geolocation functionality and augmented reality maps to find friends and the best places to watch UEFA EURO 2012 matches at home or abroad.

Supporters in Poland and Ukraine can also take advantage of the built-in travel information service to learn more about the cities they are visiting and the stadiums, find out travel information and discover the official UEFA fan zones in Poland – where fans can visit the Orange area to charge their phones, play interactive games and relax with friends.

“A combination of UEFA’s football knowledge and Orange’s digital understanding has allowed us to create an exciting experience for supporters with the Official UEFA EURO 2012 mobile application through the integration of tournament information, live match updates, the latest news as well as certain social media and geolocation features,” said Alexandre Fourtoy, UEFA communications director.

“We are delighted to have Orange as a partner to help us create new ways for fans across Europe to enjoy and share the passion of Europe’s finest national team football tournament.”

The official UEFA EURO 2012 mobile app is available in all major application stores for fans, and UEFA and Orange will be releasing updates closer to the event to add some advanced features like friend and venue finder, fan kit, and premium video highlights. Image©uefa.com

View all posts by: Abdul Rahim
One Response to “UEFA and Orange launch UEFA EURO 2012 app”