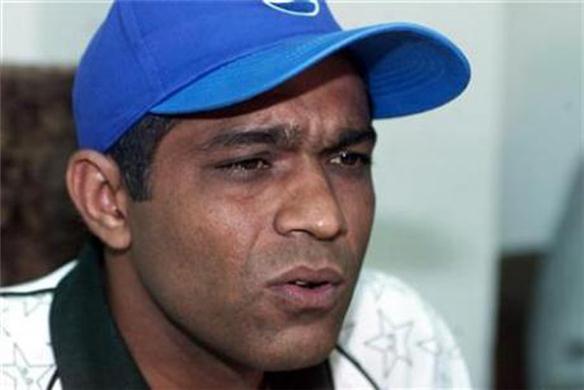 Karachi – Pakistan, July 27, 2012: A bunch of international players will also be seen in action when the 1st RLCA All Pakistan Ramazan-Ul-Mubarak Floodlight Football Tournament explodes into action here at the RLCA Ground in Korangi, Karachi from July 30.

This information was provided by the Organizing Secretary of the Tournament and former Wicket Keeper/Captain Pakistan Cricket Team, Rashid Latif at a press conference here at the Karachi Press Club (KPC) on Friday.

Interestingly, before the start of the event, a festival game will be conducted on July 29 at 10:30 pm between Cricketers XI and Footballers XI.
He said that Rs1.5 million would be spent on the tournament, which would be met by the RLCA. Rashid was presented a shield by Tariq Lutfi on behalf of PFF on the occasion.

Following is the details of the event:

Following teams will participate in this tournament.

20 players and 03 officials be the part of District teams.

to apply this rule strictly during the matches, if manager fail to perform his responsibility the match

Commissioner will be the next person who will apply this rule.

Note: During the competition match timing and venue can be change by the match commissioner with the consulting of organizing secretary and director tournament.

Only players registered with their teams are eligible to take part in this tournament, none registered players with department can be registered in district teams.

a. All teams are required to complete Registration Performa and send it to organizing secretary at opening ceremony. On 30th July,10th of Razman ul Mubarak

d. If any team is found guilty of fielding an in-eligible player, Player/Manager/Coach/ technical committee will not allow to sit on the bench and as well as in the field.

5. Number of players and officials in each Team

ii. Only AFC “A”, “B” and “C” qualified person will be sit on the bench as head coach but for assistant coach can be “D” certified.

6. Accommodation, transportation and kits and gears.

RLCA shall be responsible and have full control of the technical organization and management of football tournament as per FIFA/AFC/PFF rules. The following will be the members of management committee:-

Laws of the game promulgated by the Federation International de Football Association Board and published by FIFA shall be applied. However the playing format will be intimated in the managers’ meeting.

Not more than Three (3) substitutions are allowed during the 90 minutes of the normal playing time and 30 minutes extra time for knock-out stage. The eleven (11) playing and reserve player names list must be declared 30 minutes before the kick-off time.

i. To observe the regulations and accept the decisions of the respective RLCA tournament Committees.

ii. To observe the principles of fair play.

iii. To arrive at the venue of the match at least 60 minutes before the match kick-off time.

iv. Manager/Coach will Keep a record of Goals, Cautions, Expulsion, and ensure that only eligible players take part in all matches of their teams. Any discrepancy in this regard will be treated as Violation/Misconduct; they will be punished as per clause 19.a.

v. List of Players and officials with photo copy of Registration form of team with full particulars should be handed over to organizer at the arrival of venue and in the Manager’s Meeting.

vi To attend press conferences and any other official media activities organized RLCA.

vii. Each team shall wear its official colour which shall also be declared in the Manager’s Meeting.

Note: Departmental teams are directed to bring with them two (2) different colours uniform and must indicate colours and team list one hour before start of the match.

viii. Ensure and help match officials that only registered person’s sit on the team bench.

x. Direct the Captains of their teams to wear arm band and hand it to some other player if he is to be substituted.

The tournament will be played on Round Robin League basis. Number of Groups and teams in each group will be decided in the mangers’ meeting and each team playing one match against each of the other teams in the same group.

a. The qualification in each group shall be determined as follows:-

i. Number of points.

v. Kicks from the penalty mark if the teams concerned are still in the field of play.

b Two top teams from each group shall qualify for the quarterfinals.

c. The Winners of Quarterfinals will play the Semifinals.

e. The winners of the Semifinals will play the Final.

The matches will be played as per following procedure:-

Each match shall last 90 minutes, comprising two periods of 45 minutes, with an interval of 15 minutes in between from the whistle ending the first period to the whistle starting the second period.

In case of ninety (90) minutes draw, Winner will be decided on kicks from the penalty mark.

If the match is stopped by the Referee before the end of normal time or during any extra time because of any force measure or any other incidents such as, but not limited to, the field is not fit for play, weather condition, floodlight failure, etc. The following procedures must be followed:

a. The match is automatically suspended for the duration of thirty (30) minutes to allow conditions to improve sufficiently to restart the match, unless the Referee decides that the match can be resumed earlier.

b. At the discretion of the Referee, another suspension of a maximum of thirty (30) minutes shall be allowed if in his opinion this extra period of suspension will allow the match to be resumed. Otherwise, the match has to be abandoned.

c. In the case of an abandoned match, the MC shall decide within four (4) hours of the Referee’s decision to abandon the match with the approval of PFF whether the match result at the time of abandonment is valid or whether a replay shall be organized, taking sporting and organizational considerations in to account.

d. In the case of non-availability of time for replay of abandoned match due to any reason the match decision will be made by the Match Commissioner in consultation with RLCA Technical committee on following:-

• kicks from the penalty mark will be taken

Fair Play Trophy will be awarded to the deserving team which will be decided by yellow and red cards during the competition and Match Commissioner is responsible to maintain the records.

i) No protest shall be entertained regarding the following:-

b) Ground & its apparatus

ii) However the protest if any should be lodged to the Match Commissioner within 30 minutes of the expiry of the concerned match along with the protest fee.

iii) The protest fee shall be Rs: 5,000/- refundable if the protest is upheld (No cheque will be acceptable).

a. AFC / FIFA Disciplinary Code will be implemented in all cases.

b. Following Disciplinary rules shall be applicable to the competition.

i) The official or players sent off by the referees shall remain suspended till such time the Match Commissioner decides the case.

ii) The Match Commissioner must decide the case within 24 hours or before the team concerned next match.

iii) The Match Commissioner shall decide the case keeping in view the punishment suggested below:-

i) The player shall be cautioned.

ii) To suspend for one match.

iv) To suspend for the whole tournament.

c. Players cautioned or dismissed from field of play

It will be in accordance with FIFA rules and Laws of the game approved by IFAB (International Football Association Board).

d. Walk over & walk out shall be considered serious misconduct

i) Team conceding walk over or found guilty of walk out or stopping the play shall be suspended. All the matches of that team, played or yet to be played shall be cancelled awarding the opponent team three goals with three points. However, the actual number of goals shall be taken into account if more than three goals were scored before the walk out/stopping of the match.

ii) Match abandoned for any other reason shall be decided by the Match Commissioner accordingly.

e. Late arrival of the teams will be considered serious misconduct

i) Each team will report to the match officials 60 minutes before the kick off time given to them.

ii) The match officials will decide about the walk over after 15 minutes of the kick off time given to them if they fail to observe instructions mentioned in 18 – e (i).

a. Should a team field unregistered, suspended or ineligible player, and obtain a win by default, a score of three (3) nil (0) will be given to the non infringing team, unless the goal difference, attained in the match is greater in favor of the non infringing team. The Manager /Coach/Player/Team/Association of the infringing team will be suspended by the Match Commissioner and the case will be referred to the Tournament Disciplinary Committee for its action.

b. If any team fails to fulfill an engagement may be liable to expulsion/disciplinary action and fine as per 17.f by the Match Commissioner and the case will be referred to the Tournament Disciplinary Committee for its action.

RLCA will have the final authority to interpret these Rules and Regulations and decide the matters, not provided in this Rules. The decision of RLCA shall be final and binding on all parties and shall not be appeal-able judicially or otherwise. If the Match Commissioner fails to implement this Technical Regulation, RLCA Technical committee will take the final decision.

Chief Guest for opening/closing ceremony and other matches will be arranged by organizing secretary and Director Tournament of RLCA football tournament.