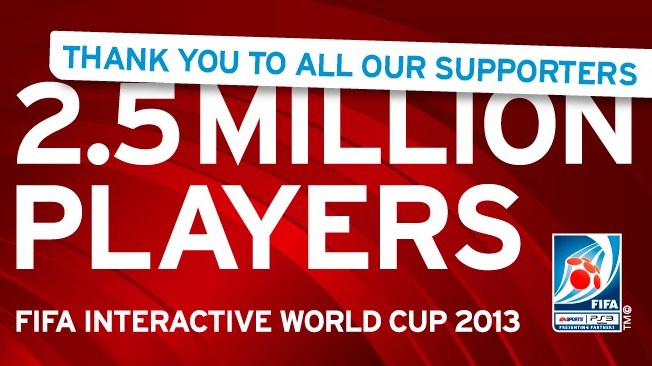 Zurich, April 25, 2013: A staggering 2.5 million players signed-up for the FIFA Interactive World Cup (FIWC) in 2013, making this year’s tournament the most contested in the FIWC’s ten year history. The world’s top 21 virtual footballers who emerged victorious during one of the six seasons will meet in Madrid between 6 and 8 May to go head to head at the Grand Final to determine the FIWC 2013 champion.

Acknowledged by Guinness World Records as the largest online gaming tournament in 2010, the FIWC has continued to grow significantly. Research produced by FIFA to mark the 2.5 million milestone revealed that playing in the tournament makes you a more credible choice for a real life managerial job. The most recent survey of FIWC players has revealed that 71 per cent would be happy if the team they supported in real life appointed a FIWC player as manager meaning that Pep Guardiola, Jose Mourinho and Sir Alex Ferguson could soon be joined by an unknown quantity in Europe’s elite band of coaches.

Confidence in the ability of the FIWC to produce a manager was strengthened further when more than half, (51 per cent) of all those surveyed stated that playing the game improved their overall managerial skills. Most notably the ability to make important game changing decisions, such as substitutions and changes in formation.

It has also been discovered that 78 per cent of those who play the game are sure it has boosted their tactical knowledge, with those questioned stating that the option to play across the world’s top leagues allowed them to experience different team styles and league tempos, which broadened their knowledge of how to build successful sides.

Additionally, 76 per cent said that the FIWC particularly improved their positional awareness with the majority highlighting the different patterns of play that can be created dependent on the wide range of formations available for selection.

It’s not only during the game where the improvement can be felt as 46 per cent declared that their training techniques improved. Furthermore, current and two-time world champion Alfonso Ramos said: “Playing FIFA 13 and taking part in the FIWC has really fine-tuned my tactical knowledge and my decision making has improved greatly. There are so many good FIFA 13 players in the tournament that your positional play has to be spot on otherwise you’ll get picked off, and I know that playing the game has really sharpened mine. I have a greater appreciation of the game of football and management of a team because of my experiences in the FIWC.”

Although they are not landing top managerial roles yet, FIWC competitors are no strangers to mixing with the world’s best footballers. Ramos, 24, who also coaches his local team, lived every football fan’s dream when he attended the FIFA Ballon d’Or gala, where he met a host of the world’s top footballers and took on Barcelona star Gerard Pique at a game of FIFA 13.

All the action from next month’s Grand Final will be live-streamed and available to watch on www.youtube.com/fifatv. —- FIFA