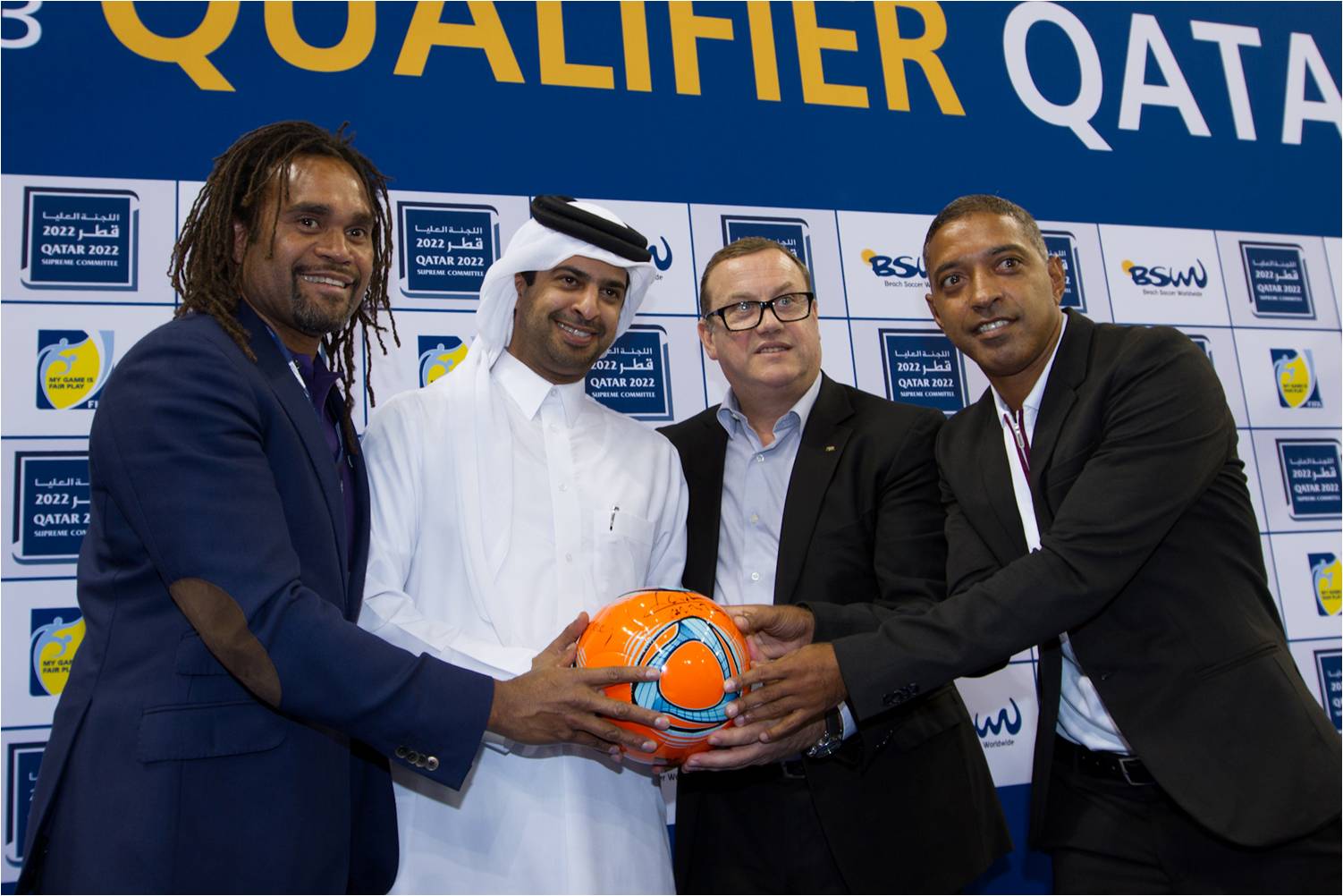 The qualifying rounds will be played in Doha between 22-26 January at Katara Beach. Teams will vie for three spots at the 2013 FIFA Beach Soccer World Cup, which will be held on the Pacific island of Tahiti. Qatar’s national Beach Soccer team will be attempting to qualify for the first time, under the stewardship of Brazilian coach, Nenem.

Speaking at the press conference, Qatar 2022 Supreme Committee Marketing and Communications Director, Nasser Al Khater said: ‘Our decision to partner with FIFA Beach Soccer to host the Asian World Cup qualifiers demonstrates our commitment to the growth and development of football in Qatar and the region. It provides Qatar with an opportunity to showcase its hosting abilities in terms of organizing a successful event with the aim of building toward ultimately hosting an unforgettable World Cup in 2022.’

Al Khater added: ‘Hosting the Asia Qualifier is an opportunity for the general public in Qatar and visiting fans from neighboring countries to come to a fun event, support their national teams and utilize the incredible beaches that our nation has been blessed with.’

Joan Cusco, speaking on behalf of FIFA Beach Soccer, thanked Qatar for supporting the sport and elaborated on why Qatar is an ideal destination for the Asian qualifying rounds: ‘Beach Soccer has been received tremendously well in this region. We hosted the Asian qualifiers in Oman in 2011 and at the beginning of this month hosted the Samsung Beach Soccer Intercontinental Cup in Dubai, which will now be held on an annual basis. The quality of the beaches, combined with Qatar’s commitment to sport and football in particular, makes Doha an ideal destination for us.’

Qatar’s national Beach Soccer coach, Nenem, who is the top Brazilian goalscorer in the history of Beach Soccer and who was voted best player in the world in 2002, believes that hosting the qualifiers can raise the profile of the sport and his players in Qatar: ‘Playing host to the qualifying round is an exciting opportunity for our team. We will have the advantage of playing our matches in front of a home crowd. I hope that hosting the event will engage the local public with the sport and raise awareness of the talent that we have in our squad.’

Christian Karembeu, former Real Madrid and France star and FIFA Beach Soccer ambassador spoke about the sport from a player’s view: ‘Beach Soccer requires skill, agility and speed and the players that represent their national teams are extraordinarily talented. With the qualifiers, football fans in Qatar will be treated to an incredible week. The players will enjoy being here too; the beach surfaces are perfect for football.’

The official draw for the qualifiers will take place in Doha in December following the closure of team registrations. —- Qatar2022