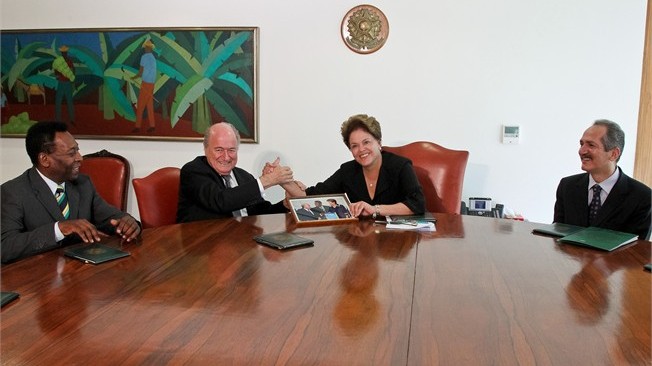 2014 FIFA World Cup Ambassador Pele, LOC Board of Administration Member Ronaldo and Sports Minister Aldo Rebelo also attended the meeting at the Palacio do Planalto. President Dilma Rousseff reassured the FIFA President that all commitments made by the Brazilian government in the form of government guarantees – signed by at that time President Lula in 2007 – will be fulfilled.

“It was a very good meeting”, explained FIFA President Blatter, “We will work very hard together to achieve our clear and common joint goal: to deliver the best ever FIFA World Cup. The international interest in attending Brazil 2014 is huge. As such we must ensure that the entire country is ready to accommodate both millions of fans, and stage an amazing event.

“People will be coming from all over the world and we have a collective responsibility to them. I have full confidence and trust in President Dilma Rousseff and Brazil.” President Blatter also said that he was pleased by the fact that two iconic former football players supported the meeting.

The two Presidents also agreed from now on to meet more regularly either in Brazil or at the occasion of a visit to Europe of President Dilma Rousseff.

“It was a very constructive meeting and we have reaffirmed our joint objectives to stage a great FIFA World Cup. The government wants to work in harmony and in good cooperation”, said Sports Minister Aldo Rebelo.