By Amelia Fisher-Starzynski, London, UK, June 11, 2018: Over eight billion digital interactions are expected during this summer’s World Cup, the equivalent of every person in the world liking or commenting on content related to the tournament. The event promises to shatter social media records across all platforms (New player social media ranking tool). 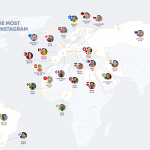 With a record global audience of 1.1 billion following the players’ every move on Instagram alone during the tournament, this summer’s flagship football event provides an unrivalled opportunity to connect with audiences and fans.

Heading into the tournament, Cristiano Ronaldo has been named the most influential player on digital channels following the launch of exciting new technology that can monitor and rank players’ activity on social media in real time.

Primetag – the leading Portuguese developer of technology to measure influence on social and digital media – has unveiled a dynamic new tool that will display up-to-the-minute rankings of the social media activity of all players participating in this summer’s football spectacular in Russia, by group, nation or worldwide.

“Social media is an incredible tool for all athletes to use. It allows us to speak directly with our fans and have a voice whenever we need one.

This World Cup will be the biggest one ever on social media as far as content from players is concerned and I am really curious to find out who will be the most popular and influential stars during the tournament.”

Ahead of the opening match of the World Cup, the top 20 player Instagram rankings are:

Additional highlights from the data unveiled at the media launch in London today include:

• By continent, Ronaldo (Portugal) tops the table in Europe and worldwide with 128M followers, Neymar (Brazil) is number one in South America with 94M, Mo Salah (Egypt) is top in Africa with 16M, Keylor Navas (Costa Rica) leads in North and Central America and the Caribbean with 6.9M and Sardar Azmoun (Iran) tops the rankings in Asia with 2M

The Primetag tool is expected to revolutionise how players, teams, brands and media can access key information to help them harness the power of social media and maximise their influence on the global stage (New player social media ranking tool).

It will be made available to media throughout the tournament, so they can easily track players’ activity and keep up to date with the most “liked” and “shared” moments of the World Cup, dramatically enhancing the depth and availability of player and team social media data during the global event.

“Social networks are not here to replace traditional interviews or press conferences, but to provide journalists with the tools to shape content creation.

They are a reliable source for the stories that will drive the most audience engagement, as social network insights allow for an estimate of an article’s potential success. In a chaotic sea of World Cup related posts, journalists will find it easier to spot the most eye-catching story, in real time.”

Primetag is a global company based in Portugal that develops technology with the purpose of measuring influence. The world is changing and the behaviour of our society is being shaped by new technology.

Anyone with a skill or talent can create a global audience using the social media platforms available. Primetag, Portugal’s number one company in this sphere, uses technology to study how these people can influence their audiences (New player social media ranking tool).