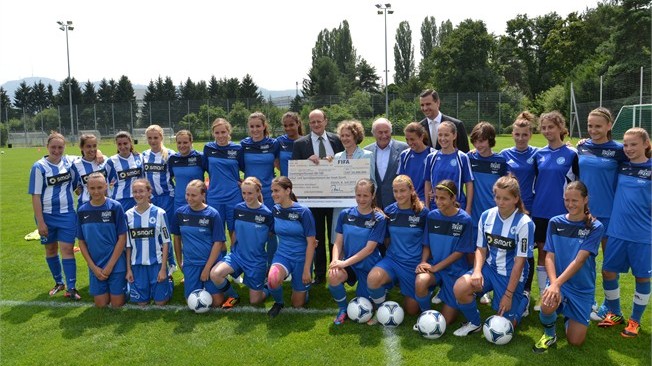 Zurich – Switzerland, July 4, 2012: million donation, The City of Zurich has announced six projects that will benefit from a donation provided by FIFA. At its meeting on 29-30 March 2012, the FIFA Executive Committee confirmed that it would make CHF 20 million available to the City of Zurich.

“FIFA has been based in Zurich for 80 years and we feel very much at home in this cosmopolitan city. Our financial support will help to modernize various amateur sport facilities across the city, from which Zurich’s residents – both men and women alike – will benefit. This is an investment in the future and a sign of our commitment to Zurich,” said FIFA President Joseph S. Blatter. FIFA’s regulations stipulate that 15% of all financial assistance payments must be used for women’s football and that will also be the case with FIFA’s subsidy for Zurich. Sepp Blatter: “The future of football is feminine.”

City Councillor Gerold Lauber, Head of the School and Sport Department, is delighted to receive FIFA’s financial support: “This will ease our investment budget, which means that we can push ahead with the renovation work that we have planned for football pitches.” The fact that women’s football will also be directly supported ties in with Councilor Lauber’s own objectives: “We have wanted to encourage girls to take part in more physical activity for a long time now.” Zurich Mayor Corine Mauch said: “There is a long history linking Zurich and FIFA. FIFA’s support for amateur sport in Zurich is another chapter in our successful partnership and it illustrates our shared passion for amateur sport.”

FIFA had originally pledged to donate CHF 20 million to the City of Zurich to help finance the construction of the new Zürich Stadium, but following the City of Zurich’s decision to allow terraces in the new stadium – contrary to FIFA’s philosophy – FIFA decided to change the intended use of its financial support in line with its principles. World football’s governing body believes that all-seater stadiums are not only more comfortable for spectators, but above all also safer.

Here is a brief summary of the approved projects:

• Hönggerberg sports complex: A natural grass pitch will be replaced with an artificial turf pitch.

• Letzi sports complex: A natural grass pitch will be replaced with an artificial turf pitch.

• Girls’ and women’s football will also be supported: