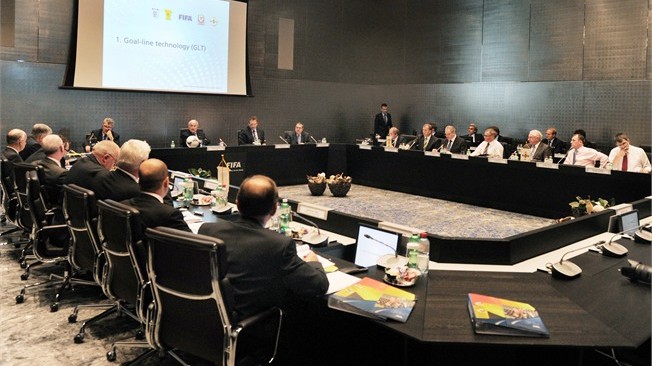 Zurich – Switzerland, July 05, 2012: The International Football Association Board (IFAB) convened at the Home of FIFA in Zurich today, 5 July 2012, for a Special Meeting under the chairmanship of FIFA President Joseph S. Blatter.

The first item on the agenda was goal-line technology (GLT). Following the conclusion of a nine-month test process that began in August 2011, led by EMPA (Swiss Federal Laboratories for Materials Science and Technology), the IFAB unanimously decided to approve in principle both companies that took part in Test Phase 2: GoalRef and Hawk-Eye. This approval is subject to a final installation test at each stadium before the systems can be used in “real” football matches, in accordance with the FIFA Quality Programme for GLT.

The IFAB was keen to stress that technology will only be utilised for the goal line and for no other areas of the game.

Revisions to the wording of specific Laws of the Game will now consequently be made, relating to: Law 1 (The Field of Play); Law 2 (The Ball); Law 5 (The Referee); and Law 10 (The Method of Scoring).

The second decision of the IFAB concerned additional assistant referees (AAR) following a two-year experiment in the UEFA Champions League, Europa League and EURO 2012, as well as the AFC President’s Cup and competitions in Brazil, France, Morocco and Qatar.

Following a presentation by the AAR Experiment Coordinator, Donald McVicar, the IFAB again unanimously agreed that the use of two additional assistant referees be approved, acknowledging the support they can provide in officiating football matches.

As a result of this decision, an amendment will be made to the Laws of the Game, with a separate section concerning additional assistant referees. It was also approved that communication equipment be permitted between match officials in the Laws of the Game.

The third main topic for discussion concerned Law 4 – The Players’ Equipment, and specifically the “headscarf”.

The IFAB agreed to unanimously approve – temporarily during a trial period – the wearing of headscarves. The design, colour and material permitted will be defined and confirmed following the IFAB Annual Business Meeting in Glasgow in October.

Currently there is no medical literature concerning injuries as a result of wearing a headscarf, and therefore the decision taken today will be reviewed at the IFAB Annual General Meeting in 2014.

In other matters, the IFAB confirmed that the Annual Business Meeting will further discuss the issue of “triple punishment”, currently detailed in Law 12 (Fouls and Misconduct; Sending-off Offences), and also agreed to discuss further how the IFAB can improve consultation with the game.

The decisions concerning the Laws of the Game taken today regarding GLT and AAR by the IFAB will come into effect immediately.

The 127th Annual General Meeting will take place in Edinburgh, Scotland on 1-2 March 2013.