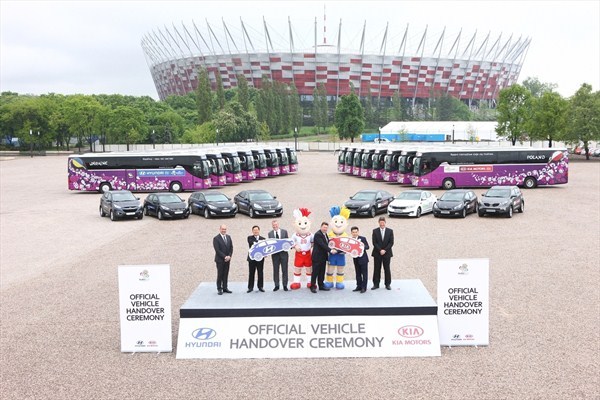 Lausanne, May 16, 2012: Hyundai-Kia have handed over the keys to the fleet of vehicles which will transport teams, guests and officials at UEFA EURO 2012, including the 16 team coaches.

A total of 366 Hyundai vehicles and over 350 more from sister company Kia will be deployed in Poland and Ukraine, with Hyundai Motor Europe president Terry Im delighted to be involved. “Football conveys dynamism, excitement and passion,” he said. “These are precisely the emotions that Hyundai wants to share with our customers.” Benny Oeyen, marketing vice president of Kia Motors Europe, explained: “Kia Motors is a proud supporter of football and we are excited to play an integral role in the successful coordination of EURO 2012.”

“With only 23 days to go before the tournament begins, the vehicle handover is a key milestone in the preparation for UEFA EURO 2012,” added Guy-Laurent Epstein, marketing director of UEFA Events SA. “Recognised as a leading global manufacturer of stylish, reliable and comfortable vehicles, Hyundai will contribute to the tournament organization by providing teams, officials, and guests with high quality transportation.”

The UEFA EURO 2012 fleet will include Hyundai models Equus, Genesis, ix55, Santa Fe, ix35, i40, Sonata, Elantra and the new-generation i30 cars as well as more than 200 H1 vans. Kia will showcase the all-new cee’d, Rio and Sportage models, which are among the top selling cars in Europe, as well as its D-segment sedans, Cadenza and Optima Hybrid, which have not yet been introduced to European customers.