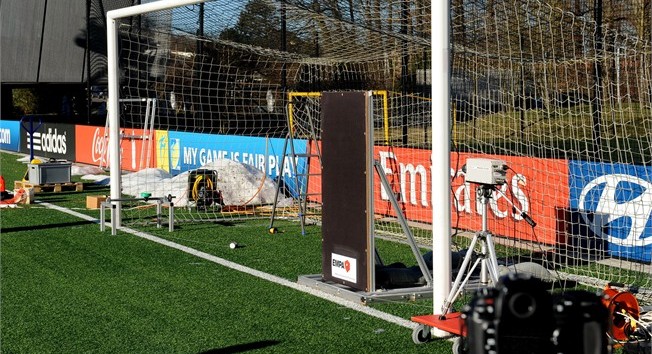 Between 10 May 2012 and the beginning of June, EMPA (Swiss Federal Laboratories for Materials Science and Technology) will test both systems with the following aim: to rigorously assess the reliability and accuracy of each system, as well as how robust the technology is.

The IFAB have confirmed the second test phase will be comprised of four different elements:

1. Field Tests. These will take place in a football stadium chosen by the GLT system provider. EMPA will conduct a greater volume of shots on an empty goal, shots against an impact wall, shots on a goalkeeper, and the sled test, as per Test Phase 1. (See video linked on the below):

2. Training Sessions. A series of simulated scenarios on the field using players will assess the GLT systems with an increased number of players in and around the goalmouth.

3. Laboratory Tests. Both GLT systems will be tested against a variety of ambient and technical conditions. This will include simulating different climatic conditions (including rain, smoke/fog and heat/humidity), testing against the impact of proximity to mobile phone transmitters or other magnetic field distortions (e.g. TV cameras, LED advertising boards) and tests on the watches which would be worn by the match officials.

4. Real ‘Live’ professional matches. To ensure that every eventuality has been considered in the two testing phases, each company is also required to have their systems tested in two separate ‘live’ matches. Critically, only the EMPA observer in the stadium will have access to the GLT system readings, and the system will NOT be utilised by the match officials. Therefore the GLT system will have no influence on the outcome of the matches in which the system is being tested.

Hawk-Eye’s ‘live’ matches commence with the Hampshire FA Senior Cup Final between Eastleigh FC and AFC Totton on 16 May at St Mary’s Stadium. A second fixture will be confirmed shortly.

GoalRef’s system will be tested in two separate matches. This could be either two Danish Superligaen matches, or one league fixture and a forthcoming international friendly match.

FIFA would like to place on record its sincere thanks to the Swiss Football League, Dutch FA and German FA for expressing their great interest in supporting the live match tests. For logistical and commercial reasons, tests in these countries couldn’t be conducted within the required time frame.

The Phase 2 test results will be provided to the IFAB in order for a definitive decision on the use of GLT technology to be made at their Special Meeting in Kiev on 2 July. Image © Foto-net