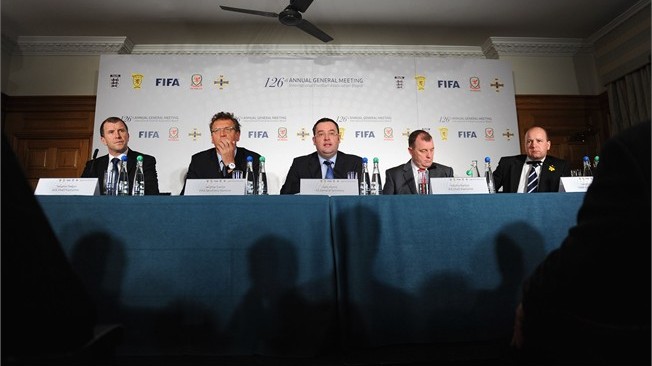 The IFAB received a general evaluation of eight available Goal Line Technology (GLT) systems by EMPA (Swiss Federal Laboratories for Materials Science and Technology). The first phase of GLT testing was conducted between November and December 2011.

Of the eight companies, two companies, Hawk-Eye and GoalRef – following the set criteria and recommendation by EMPA – were approved by the IFAB to take part in the second phase of testing. Hawk-Eye’s system uses Optical recognition with cameras, whilst GoalRef utilises a magnetic field with a special ball to identify a goal situation. The second test phase – to take place between March and June 2012 – will rigorously assess the reliability and accuracy of each system, as well as how robust the technology is.

Following the conclusion of Test Phase 2, should one or more companies fulfil the criteria, a Special Meeting of the IFAB in Kiev on 2 July 2012 will decide on a definitive approval of GLT.

In relation to the proposed amendments to the Laws of the Game, approval was granted by the IFAB to amend Law 1 (The Field of Play, Commercial Advertising), clearly defining the location of upright advertising. Approval was also granted to The FA’s proposal regarding modifications to the number of substitutions allowed in amateur football. An option was offered to all four British Associations to carry out a two-year experiment.

The IFAB also approved an amendment to Law 4 (The Players’ Equipment) and to Law 8 (The Start and Restart of Play). Law 8 now clearly defines the action that should be taken by match officials, should the ball be kicked directly into the goal from an ‘uncontested’ dropped ball.

FIFA agreed to withdraw the proposed amendment to Law 3 (The Numbers of Players) in relation to a fourth substitution being used during extra time, and the proposal regarding Law 12 (Fouls and Misconduct) concerning the so-called ‘Triple Punishment’ will be reviewed further.

In other matters, the IFAB received a presentation on the Additional Assistant Referees (AAR) experiment. Experiments are ongoing in the UEFA Champions League and UEFA Europa League, as well as competitions in Brazil, Morocco and Qatar. A final report will be made at the Special Meeting of the IFAB on 2 July, following the conclusion of the UEFA EURO 2012 competition, in order that a definitive decision on the future of AAR can also be made.

Finally, a presentation regarding the wearing of headscarves by female players was made to the IFAB. The IFAB agreed to the proposal in principle that headscarves be allowed, pending an accelerated review of health and safety issues. Therefore, a final endorsement will be made at the Special Meeting of the IFAB on 2 July.

The decisions concerning the Laws of the Game taken today by the IFAB will come into effect – taking into consideration UEFA EURO 2012 – on 1 June 2012. The 127th Annual General Meeting will take place in Edinburgh, Scotland on 1-3 March 2013.