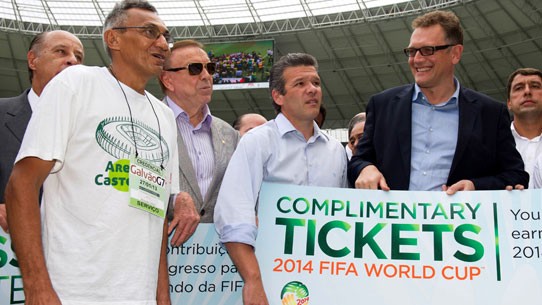 Zurich – Switzerland, May 11, 2013: In his last visit to Brazil before the FIFA Confederations Cup Brazil 2013, FIFA Secretary General Jérôme Valcke will travel to Natal on Monday morning (13 May). Together with Ronaldo and Bebeto, members of the Local Organising Committee Board of Administration, and Luís Fernandes, Deputy Sports Minister, he will meet the governor of Rio Grande do Norte, Rosalba Ciarlini, and the mayor of Natal, Carlos Eduardo Alves. The stadium visit is scheduled for 15:00.

Soon after, the delegation will head to Brasília, where on 14 May they will meet the Governor of the Federal District, Agnelo Queiroz, and the Sports Minister, Aldo Rebelo. The stadium visit is scheduled for 10:00. The host city tour will finish in Rio de Janeiro on 15 May, with a visit to the Maracanã at 09:30. There will also be an LOC Board meeting on 16 May (information to follow in a separate advisory).

In all three of these host cities, Jérôme Valcke will hand over symbolic tickets to representatives of the construction workers. Everyone who helped to build or renovate the 12 FIFA World Cup stadiums will receive two tickets to the first match in their respective venues in 2014 (with the exception of the opening match in São Paulo, where the tickets will be for the second match in the venue).

For additional information and accreditation requests, media representatives are asked to contact the venues directly: