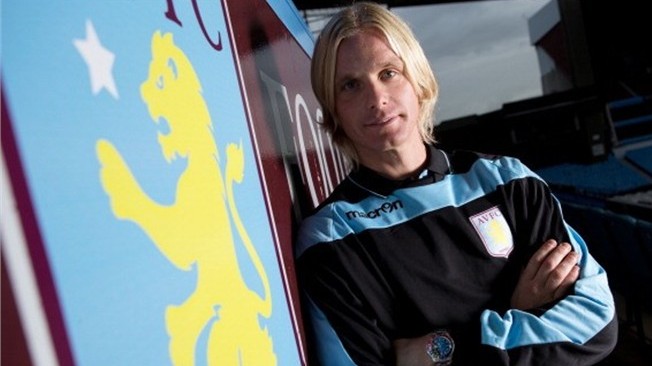 Zurich, Oct 20, 2012: Italian footballer Simone Farina, who earlier this year became a FIFA ambassador for fair play upon invitation from the FIFA President Joseph S. Blatter, has been appointed as a community coach by Aston Villa, the English Premier League club announced today. Farina’s work will include developing Villa’s youth programme on integrity in sport.

Citing Farina as an example for young people, the FIFA President said: “I am very proud of Simone. We definitely need football to be clean, transparent and honest. That’s what Simone believes in. That’s what we believe in.”

Commenting on this new role for Farina, Blatter added: “It is crucial for the world of football to stand together with players who defend the game against match-fixing. They are role models for society, and especially the children who love our game. I wish to congratulate both Aston Villa and Simone, and wish them all the very best in their cooperation.”

I am very honoured to have been entrusted with these responsibilities. I know I did the right thing when I refused to get involved in the fixing of a football game.Simone Farina

Paul Faulkner, Aston Villa Chief Executive, welcomed Farina to his new job at the club: “Simone will bring a whole depth of experience to our community coaching programme, he has already integrated well into the good work of our other coaches and we’re delighted as a club to have him here, carrying on an important role in the area of youth development.”

Farina will continue as an ambassador against match-fixing for INTERPOL and FIFA, two organisations which in May 2011 formed a partnership to tackle corruption, match-fixing and organised crime related to illegal betting.

The 30-year-old defender, who received special recognition from the FIFA President at the FIFA Ballon d’Or Gala in January 2012, took the brave step of approaching the police after being asked to influence the outcome of a 2011 Coppa Italia game of his club at the time, Gubbio 1910. He rejected an offer of €200,000. Thanks to his honesty and integrity, the authorities were able to break up a major illegal betting ring.

“Corruption in sport is a very complex problem for which there is no quick fix. In addition to strong enforcement efforts, all those linked to the ‘beautiful game’ must place a great emphasis on prevention. In this respect Simone Farina’s appointment by Aston Villa as a coach in its community outreach programme will allow him to continue to work to keep football clean,” commented Ronald K. Noble, Secretary General of INTERPOL.

Reacting to his new position, Farina said: “It is important to me that I continue to work in football and that I am able to pass on my knowledge because football is an inspirational game. A year ago, I did not see my life moving in this direction but I am really delighted to be able now to contribute in this way.

“I am very honoured to have been entrusted with these responsibilities. I know I did the right thing when I refused to get involved in the fixing of a football game. But all I did was just abide by the rules. Therefore, my message for youngsters is simple: ‘Learn to respect the rules and have fun’.” FIFA/Photo © Getty Images