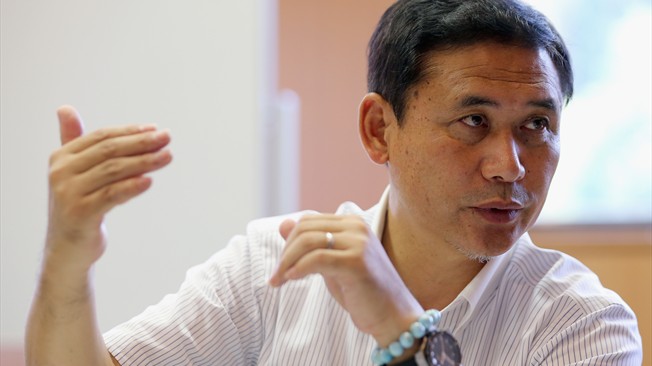 Having also led Japan to a silver medal at the recent London Olympics, Sasaki has been at the forefront of women’s football development, with his side receiving widespread praise for their skilful and fluent brand of football.

Sasaki recently addressed a group of some 30 women’s football coaches from all over Asia, plus invitees from New Zealand and Papua New Guinea, who are attending an intensive ten-day coaching workshop in Tokyo.

The FIFA initiated workshop, which is part of the FIFA U-20 Women’s World Cup legacy programme, aims to enhance the impact of the competition beyond the tournament and contribute to coach education within the region.

The highly-regarded Nadeshiko coach took time out from his visit to the coaching workshop to chat with FIFA.com about his thoughts on Japan 2012, the growth in women’s football development and Japan’s next generation.

FIFA.com: You had the opportunity to address a large group of women’s coaches from all over Asia. What changes have you noticed in women’s coaching and how has that translated to on-field performance?

Norio Sasaki: In the past the strongest four countries were always relying on their power and speed. But now more tactics are being used thanks to development in coaching. Now the top countries are using more and more combination play and tactics in attack and defence, so I think that women’s coaching has improved dramatically in recent years. However, I still think only a few teams have demanded the highest standard, which is a change I think started to occur at the 2008 Beijing Olympics. But overall, there is no doubt the quality of women’s football is much higher now.

How have you enjoyed the tournament so far?

There is improvement across all the 16 nations and matches are generally improving. In the past there was often kick and rush football [at this tournament] and physical play, while now there is more pass and move style.

Almost all the [Japan 2012] teams seem to have a vision for producing players that can reach the full squad.

Japan senior team coach Norio Sasaki Have any teams in particular caught your eye with their style of play?

Yes, many teams. Germany, for instance, try and play with a possession game which is interesting. The likes of New Zealand used to be based on power and speed, but now they try a pass and move style. They have tried to improve individual techniques, which partly combines with improving their tactics. Women’s international coaches have also realised the importance of tactics, which I think is something that has been revealed in this tournament.

And what about development with players, and have any stood out for you?

What do you think about the style and quality of football so far at Japan 2012?

The quality at this tournament is excellent compared to previous tournaments. Almost all the teams seem to have a vision for producing players that can reach the full squad, even some of the more developing nations.

European teams often have better physical attributes than us, which means we must continually work on our technical skills to combat that disparity.

What do you think about the next generation of Japanese talent on display at this tournament?

Japan has won the FIFA Women’s World Cup and Olympic silver medal, but development in this country is still in the process of improving. European teams often have better physical attributes than us, which means we must continually work on our technical skills to combat that disparity. Japan needs to constantly work on players that can create and find space, even if space is limited and narrow. From now on, such skills are a key factor for the Young Nadeshiko and also the senior team too.

Notably, Japan and Korea Republic have played a passing and possession game at Japan 2012 with success, including against more physical teams. Is that a trait that can work particularly well in women’s football?

Especially for Asian teams like Japan and Korea, certain tactics suit us more than spectacular football based on power and speed. East Asian players are physically smaller than European and North American players, that is reality. World women’s football coaches may think that a nation with physical prowess and speed is sufficient, but the game will be harder for them if they are not possessing players with individual skills. We Japanese women’s football coaches believe that off-the-ball movement is becoming more important. Speed of transition is important too, especially for East Asian teams in beating European teams.

Finally, do you have any words of encouragement to Japan football supporters as to why they should attend matches at Japan 2012?

Firstly, women’s football is absolutely based on fair play, and I hope the people around the world and at this tournament will be enthused by that aspect of women’s football. Every female player gives her all in every match. I have constantly been impressed by the honesty of fair play in my seven years in women’s football. Our Nadeshiko are welcomed and applauded by Japanese fans because they compete so well, though having inferior physical attributes. I think also fans in the stadium at Japan 2012 will see the meaning of team play that is always on show in women’s football. I hope fans globally will cheer and support women’s football. –— FIFA/Image © Getty Images