Home  »  FOOTBALL   »   Thais aims to live up to Marta comparisons 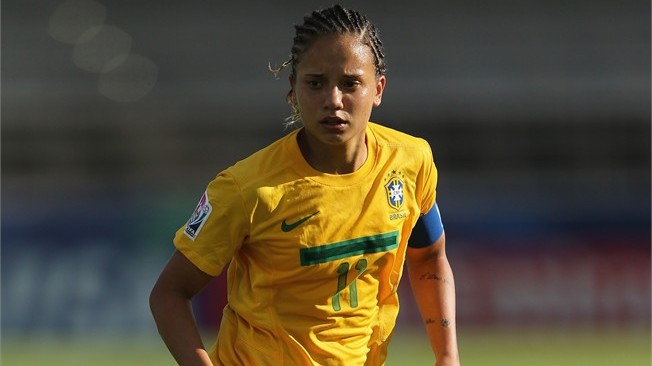 Saitama – Japan, August 24, 2012: Marta, After two hard-fought draws in Group B of the FIFA U-20 Women’s World Cup Japan 2012 the alarm bells are ringing for Brazil. That much was clear on the faces of the players as they trooped out of Komaba Stadium in Saitama following Wednesday’s 1-1 stalemate with Nigeria, a result that has left them with much to do if they are to qualify from the section.

One player with reasons to be unhappier than most is the side’s captain and star act Thais Guedes, whose trademark smile was missing when she sat down with FIFA.com in the wake of the draw with the Africans.

Not surprisingly for someone who demands the very best, the forward spoke of the need to up her game: “I’m not happy with anything I’ve done up to now and I need to make a big improvement. The team hasn’t been playing its best football either. There’s something missing and we Brazilians always want more. We need to keep training if we want to find it.”

Though those words might sound harsh, they are perfectly logical when you consider the high expectations Thais generated in holding down a starting place in the Brazil team at the Women’s Olympic Football Tournament London 2012. Such is the stature the 19-year-old has already acquired that she was regarded as one of the established names in a side led by none other than Marta.

Indeed, the five-time FIFA Women’s World Player of the Year has championed the teenager’s cause since first alerting the world to her talents back in 2009, taking on a role as her “adoptive mother”, as the two like to describe it, and offering her advice during their time together at Santos and in the national side.

While proud of the praise she has received, Thais is well aware that the expectation surrounding her does get blown out of proportion at times.

“It’s other people who make the comparison. I’m in no position to talk yet,” said the young star, who now plays her club football for Vitoria das Tabocas. “Marta is a legend. She’s been voted the best player in the world five times and there isn’t anyone else like her around. I’m still little Thais, but I hope to be able to get close to her level one day. Why shouldn’t I? This tournament is a good place to start.”

Thais owes her starring role in the Brazil team to her exceptional technical ability, a gift she was aware of at an early age and which prompted her to make an important decision that caused some disappointment to her mother.

“She always wanted me to be a ballet dancer and I started having classes when I was two,” explained Thais with a smile. “The thing was, I always wanted to play football. I’d go to school and have dancing classes and even though I was tired I’d still kick a ball around and play in the street.”

Prompted by her father, she made the big change when she was six: “He saw me playing football all the time and decided to take me along to a youth team. I trained with the boys and ended up signing. Even though I decided to give up dancing, I’m convinced it’s something that’s helped me out a lot. I think that’s where I get my shimmy from.”

Determination and character have allowed Thais to take the big decisions in her life, qualities that she will once again be drawing on when Brazil take on Korea Republic in Sunday’s crucial final group game. Though she has yet to fully display her range of talent at Japan 2012, her contributions at set-pieces and her leadership on the pitch proved vital against the Nigerians and showed the way forward for the team as a whole.

“We’re coming on together,” she said by way of conclusion. “We played well against Nigeria, especially in the second half, and we created a lot of chances. Things are beginning to turn round for us. We’ve got a final coming up now, but I’m sure that we’ll step it another level.” —- FIFA/Image © Getty Images