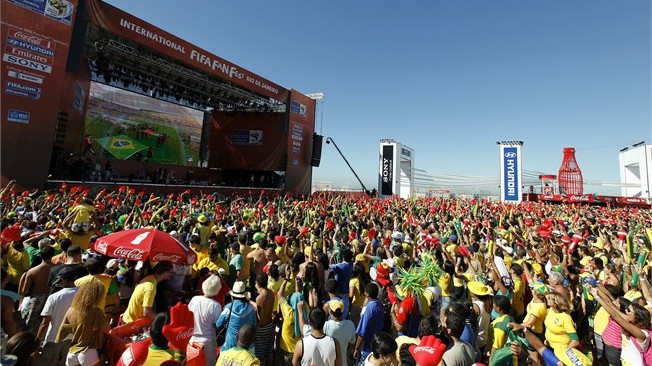 At the occasion of the board meeting of the Local Organising Committee in Brasilia today (28 June 2012), FIFA and TV Globo, the Official Broadcaster of the FIFA Confederations Cup 2013 and the 2014 FIFA World Cup Brazil™, presented the guidelines for public viewing events in Brazil during the FIFA Confederations Cup 2013 and the 2014 FIFA World Cup™. There will be no licence required for the projection of the matches in a non-commercial environment as long as the exhibitions are under a spectator capacity of 5,000 persons (“Non-Commercial Public Viewing Events”) and as long as the organisers comply with the terms and conditions stipulated in the FIFA Regulations for Public Viewing Events. These are available in the Portuguese version on the official website (Click on the link to the right. The public viewing events will be complementary to the FIFA Fan Fests, which will be organised by FIFA together with the twelve host cities.

“Football and the FIFA World Cup touch the entire host country and it is extremely important for us that all Brazilians – irrespective of whether they live in a small or big city – are part of these historic football festivals taking place in 2013 and 2014 in the home of the five-time world champions, and not only those living in the official host cities. We are sure that with free access to non-commercial public viewing events – thanks to the support of our Official Broadcaster, TV Globo – all fans in Brazil will be able to enjoy and be part of the incredible FIFA World Cup experience and transform the country into an unforgettable, massive football celebration with vivid images to be sent across the globe,” explained FIFA Secretary General Jérôme Valcke.

“My earliest memories of the FIFA World Cup are of watching the matches in 1986 and 1990 with family, friends and neighbours on a big screen in the streets. It was truly a dream for us kids to watch the Seleção perform far away from home, but with those celebrations on the streets, it made us all feel like we were right in the middle of the action. Luckily my own dream came true and I not only went to four editions of the FIFA World Cup, but I also won two of them. It is nice to think that thousands of kids will experience the same feeling that I had when I was a kid during the celebrations that will take place at public viewing events across Brazil,” said football icon and LOC board member Ronaldo.

All parties interested in staging a public viewing event in Brazil during the competitions are asked to refer to the TV Globo platform to acknowledge the FIFA regulations and submit their requests for commercial public viewing events (“Commercial Public Viewing Events”) and non-commercial public viewing events with a spectator capacity of greater than 5,000 people (“Special Non-Commercial Public Viewing Events”) via www.exibicaopublicfifa.com.br. The platform will have two different subsections, one for FIFA Confederations Cup Brazil 2013 requests and one for 2014 FIFA World Cup Brazil™ requests. As in 2006 and 2010, revenue generated by licence fees in Brazil will be donated by FIFA and TV Globo to a charity programme in Brazil yet to be announced.

“TV Globo is very proud to be working in partnership with FIFA on a great number of projects related to the FIFA Confederations Cup 2013 and the 2014 FIFA World Cup. We consider the project involving public viewing events to be fundamental as it will serve to bring the country together and enhance the joyous spirit of Brazilians around the FIFA competitions,” said Marcelo de Campos Pinto, Executive Director Globo Esportes, Rede Globo.