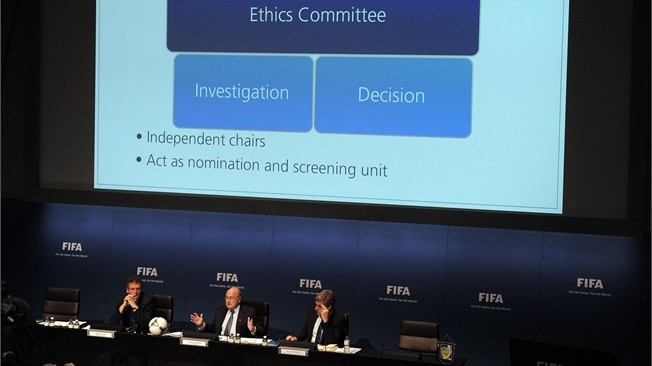 Zurich, Switzerland-March 30, 2012: Ethics Structure, Chaired by FIFA President Blatter, the FIFA Executive Committee convened at the Home of FIFA in Zurich on 29 and 30 March for its first meeting of the year and agreed to major reforms of its governance, in particular relating to ethics, audit and compliance.

Subsequently, the FIFA Executive Committee agreed on proposals to be submitted to the FIFA Congress. The FIFA Legal Committee has now been tasked with drafting the appropriate legal wording for these proposals so that they can be put on the Congress agenda, which has to be completed one month before the Congress convenes in Budapest (Hungary) on 24 and 25 May 2012.

The agreed proposals include in particular:

– Scrutinising of specific candidates for office bearers holding functions within FIFA as an official by the Ethics Committee, performing the role of a nomination unit

– Audit and Compliance Committee: increased scope of responsibility of the Audit Committee by adding compliance to its activities

– Co-optation of a woman onto the FIFA Executive Committee at the 2012 FIFA Congress; formal election in 2013

– Self-reform of the International Football Association Board

The draft Statutes prepared by the Task Force Revision of Statutes will also be submitted to the Congress for discussion.

Other items presented by the IGC and the Task Forces will be further discussed according to the roadmap.

Regarding the FIFA finances, the Executive approved the 2011 Financial Report, with a positive annual result of USD 36 million (revenue of USD 1,070 million and expenses of USD 1,034 million). 75% of the expenses were spent on FIFA events and football development projects. The Committee also approved the 2013 FIFA expense budget (USD 994 million).

Furthermore, the Executive fully supported a major innovation, namely worldwide player insurance on behalf of member associations. In short, this means that, starting in August 2012, FIFA will insure all players involved in all “A” national team games listed in the international match calendar worldwide. This proposal will now be submitted to the upcoming FIFA Congress for approval. The provisional budget for this project amounts to USD 100 million.

The proposal of the working group for the international match calendar, comprising FIFA, the six confederations, clubs, leagues and FIFPro, regarding the 2015-2018 period has been approved as follows:

– The international windows would be arranged as follows:

– Olympic Football Tournaments: the Executive decided that the release of the U-23 players by clubs will be compulsory.

– Medical: cooling breaks in FIFA competition matches in hot and humid conditions (over 31/32°C) have been approved.

Indonesia: the Football Association of Indonesia (PSSI) has been given until 15 June 2012 to settle the issues at stake, notably the control of the breakaway league, failing which the case will be referred to the FIFA Emergency Committee for suspension.

South Sudan: the Football Association of South Sudan (SSFA), admitted as the 54th member of the Confederation of African Football as recently as late February, cannot, under the current FIFA Statutes, immediately become a FIFA member. However, should the current proposed amendments to the FIFA Statutes be adopted by the 2012 FIFA Congress, the SSFA could be admitted by the Congress this year.

The two-day meeting was attended by new CONMEBOL member Marco del Nero (Brazil) as well as CONCACAF’s Jeffrey Webb (Cayman Islands), who was invited ahead of his formal appointment expected in May. The next FIFA Executive Committee meeting will be held in Budapest on 21 and 22 May 2012, ahead of the 62nd FIFA Congress. Image © Foto-net