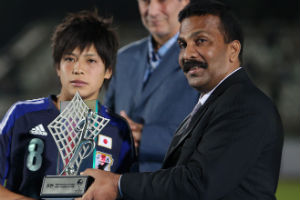 Tehran – Iran Oct 06, 2012: Uzbekistan goalkeeper Sarvar Karimov saved two penalties helping his team to lift the title of the AFC U-16 Championship 2012 after they came from behind to record a thrilling penalty shootout 3-1 win over Japan in the Saturday’s final played at the PAS Stadium.

In course of winning their maiden title at this level, Karimov saved penalties from Tokuma Suzuki and Koki Sugimori while the effort from Kohya Kitagawa went wide. Earlier both the sides were locked at 1-1 in the regulation time and with the tournament regulations preferring straight penalty shoot-out the Uzbeks washed out the Japanese dream of becoming the first Asian country to win the titles for three times.

Japan’s Takuma Mizutani put the East Asian ahead in the 6th minute but Akobir Turaev levelled seven minutes after the break.

Both the sides started cautiously but it did not take longer for the Japanese to break Uzbek defence and take a 1-0 lead. Midfielder Mizutani, who struggled to score goal earlier in the tournament scored his first goal after playmaker Taro Sugimoto released a perfect ball to him at the centre. Unmarked Mizutani latched a powerful shot past Uzbekistan goalie Sarvar Karimov for the 6th minute lead.

With the Uzbeks being busy on breaking the Japanese moves the chances were far to come by for both the sides in the first half.

Japan had their second sight at goal in the 20th minute but a diving Uzbekistan goalkeeper Karimov blocked a fierce Koji Miyoshi’s left footer.

The Uzbeks had a good spell in the later part of the first half but Captain Otabek Shukurov’s pile driver in the 35th minute was way far from the Japanese goal while his second effort – a header off Doctonbek Khamdamov corner – a minute later was easily parried away by the Japanese goalie Yuya Nagasawa.

The Blue Samurai goalkeeper had a difficult punch to keep the ball away in the 38th minute when defender Ibrokhim Abdullaev connected a powerful header off Islombek Karimov as that was the last Uzbek effort before the break.

Uzbekistan found their precious equalizer just seven minutes into the second half. A brilliant flick header off defender Akramjon Komilov wrong footed the markers and Uzbek striker Turaev did not commit any mistake to slot the ball past advancing Japanese goalie Nagasawa making it 1-1.

Japan could have immediately regained the lead but Karimov was agile to make a reflect save off Miyoshi’s powerful shot in the 57th minute. The Uzbek goalie was his best on the night as he saved another point blank effort from Wataru Sasaki in the 73rd minute.

After the equalizer, Uzbekistan’s first serious sight at goal came in the 80th minute but Japanese goalie comfortably thwart the danger away.

Japan’s final chance was the best of the match but a fierce right footer off substitute forward Kitagawa, who later missed the penalty, rattled the cross bar as the match went into penalty shoot-out. —- AFC