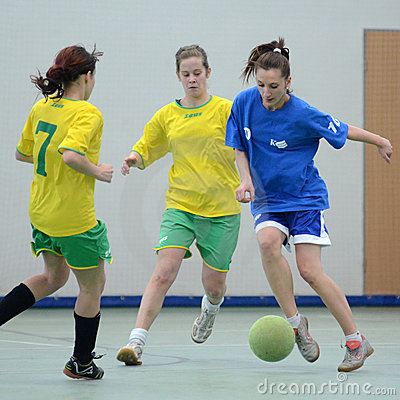 Dubai, June 2, 2012: Japan were crowned AFC Futsal Championship UAE 2012 champions with an emphatic 6-1 victory over Thailand at the Al Wasl Indoor Stadium on Friday as the East Asians took the coveted title for a second time.

Kenichiro Kogure gave the 2006 winners a fourth minute lead and after Kritsada Wongkaeo drew Thailand level in the 11th minute Wataru Kitahara restored Japan’s advantage with five minutes of the half remaining as the East Asians went into the break 2-1 up.

Thailand went into the game buoyed by their epic 5-4 extra-time victory over Iran that ended their chances of an 11th title in 12 tournaments while Japan advanced with a 3-0 win over Australia that had Japan coach Miguel Rodrigo expressing concerns over his side’s inability to convert scoring opportunities into goals.

But that was not the case when Japan took a fourth minute lead with two-time AFC Futsal Championship MVP (2005, 2006) Kenichiro Kogure comfortably dispatching Yusuke Komiyama’s well-struck cross from the left.

Japan took a 2-1 lead when Wataru Kitahara’s low shot spun past a static Surapong and in off the Thai keeper’s left-hand post with five minutes of the half remaining.

Kitahara went from hero to villain seven minutes into when he was rightly red carded for a dangerously high challenge on Suphawut but the Thais failed to capitalise on their two-minute extra-man advantage.

The tension was getting to both sides in a frenetic encounter and after Surapong was penalised for failing to release the ball within four seconds Kotaro Inababa extended Japan’s lead on the half-hour mark.

Four minutes later Thailand’s decision to employ the power play backfired as Rafael Henmi ensured he found the target in all six matches he has featured in when he struck the ball into the unguarded Thai net as the ASEAN champions sought to reduce arrears.

The Thais were undone again two more times from distance as first keeper Kawahara and then Murakami scored took advantage of all of Thailand’s on-court players being high up in the Japanese half.