Abu Dhabi, Dec 1, 2016: After an unforgettable 2016, the Asian Football Confederation (AFC) celebrated the continent’s most exceptional and memorable triumphs in a grand ceremony tonight in Abu Dhabi, in the United Arab Emirates.

In his welcome address at the Emirates Palace Abu Dhabi, AFC President Shaikh Salman bin Ebrahim Al Khalifa said: “We are grateful for all the support offered by the United Arab Emirates Football Association and the Abu Dhabi Sports Council for staging the most glittering and glamorous evening in wonderful surroundings.

“Tonight we gather here under the banner of One Asia, One Goal to celebrate the great achievements of Asian football in the last year. We applaud the AFC’s Member Associations, the coaches and the players who have impressed and excited us this year.

“We congratulate them all and all those on the short list tonight and our Member Associations for their contribution to our great sport.

“This is an exciting time – it is Asia’s time.”

UAE’s attacking midfielder Omar Abdulrahman was rewarded with the AFC Player of the Year 2016 Award. The 25-year-old has been instrumental for both club and country this year, steering UAE club Al Ain to this year’s AFC Champions League final. He also led UAE to the third round of the FIFA World Cup Russia 2018 Asian Qualifiers and has featured in all of his side’s matches thus far.

AFC Player of the Year 2016 Omar Abdulrahman said: “I would like to thank the people of the United Arab Emirates, this achievement is a national achievement. This award is for the UAE national team and Al Ain. It is the second year in a row that the award goes to a player from the UAE, it’s prove that we have talented players.”

Australia’s Caitlin Foord edged out compatriot Lisa de Vanna and China’s Tan Ruyin to capture the 2016 award in the women’s category. Featuring in the Olympics Games in Rio this year, Foord holds the record as the youngest ever Australian to play for the Matildas at a FIFA World Cup, having played in Germany at the age of 16 years and 230 days. She was subsequently named the first ever Best Young Footballer at the tournament.

AFC Women’s Player of the Year 2016 Caitlin Foord said: “I would like to congratulate the other nominees, Lisa and Tan, for an amazing year. I wasn’t expecting this, thank you to the AFC and congratulations to everyone in Abu Dhabi for hosting this wonderful event. I accept this award on behalf of all the Matildas.”

Confederation of African Football (CAF) President Issa Hayatou was presented the Diamond of Asia 2016 award in recognition for more than 42 years of outstanding contribution to the development and promotion of football, both on and off the field.

On accepting the award, CAF President Issa Hayatou said: “Words are not enough to express how I feel about the honour of receiving this distinction. The whole African continent is honoured by this award. Africa and Asia have similar opportunities and challenges. If we continue to speak with a unified voice we can look into the future together with optimism. I would like to thank the grand football family of Asia for this award.” 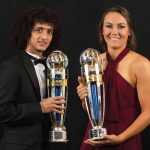 The AFC Referees Special Awards were presented at the opening of the AFC Elite Referees and Assistant Referees Seminar in Kuala Lumpur, Malaysia, on November 20. —- AFC